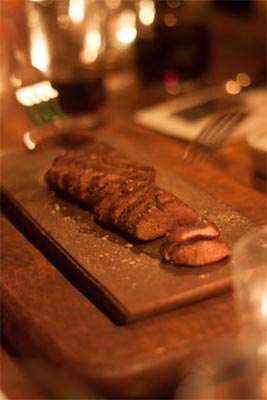 Flat Iron in Soho, best known for its affordable steaks, has invested in a very, very special cow. It's a 24-month-old rare breed Dexter who (after two summers on good meadow grass) has been fed with no less than 1,200 pints of craft beer - with a little roughage and brewers grain mixed in.

Finally after being dry aged since April 18th, this meat is ready to face the butcher. So if Flat Iron meat fans want to see this and learn some butchery skills themselves, they can sign up for the special session. It'll be run by Charlie Carroll, founder of Flat Iron, and Struan Robertson, who is head butcher of upcoming Notting Hill butchery, Provenance.

And if you can't make the session, watch out for the meat as it appears on the menu in various cuts from Rib Eye to Short Rib and Underblade Fillet from next week. There will also be a few of their Bearnaise burgers making use of the chuck and clod.

The butchery session is on the morning of Saturday18th May, sign up at flatironsteak.co.uk. The special steak will be available in Flat Iron soon - follow them on Twitter for details.