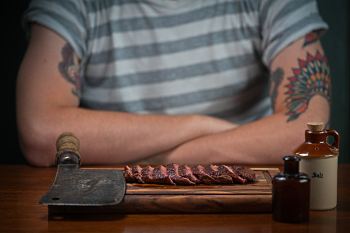 Restaurant pop-ups in pubs are becoming a clear trend in London at the moment.  Recently we've seen Patty & Bun take up shop in the Endurance in Soho while Upstairs at the Ten Bells has had an overhaul and is going from strength to strength. Now Flat Iron is about to join them.

The brainchild of Charlie Carroll, former Operations Advisor at Wahaca, Flat Iron will be taking up residency above Shoreditch's Owl and Pussycat in July. Carroll says that the project has come about after a life-long love affair with food and steak in particular. He feels that while London can do steak extremely well, doing it so well often means setting it at a high price that is beyond the reach of many. He's looking to make good steak affordable to everyone.

So he set about looking for a cut of meat that could deliver that, zeroing in on the flat iron - a cut from the shoulder of the cow that has previously been difficult to butcher. It has, in the past, often been used in hamburgers - something that Carroll thinks is a real waste of such a good piece of beef.  He describes the cut of meat as a "wonder cut" - well marbled beef that is as tender as a fillet. Given its current use for hamburgers, he's been able to source this cut from some of the best beef suppliers that currently work with the top restaurants in the country.

Flat Iron will be dedicated to this cut of meat and it will be the only dish they serve: steak and salad - a single sized cut at one price. While the price is yet to be finalised, Hot Dinners can reveal that it is very competitive and will have Shoreditch locals beating a path for Flat Iron's door.

Chips will, of course, be available as sides and Carroll says he's as dedicated to them as he is the steak - spending a great deal of time choosing the correct potato for his triple cook chips finished in beef dripping. There will also be a selection of sauces, including a Bloody Mary sauce made with Chase vodka.

Drinks wise, the cocktail menu is being created with the help of Nathan Sorby from the London Cocktail Club.  They'll include a build your own Bloody Mary with beef stock and smoked Chase English vodka, a smoked thyme bramble and a mint julep using homemade orange and rosemary cordial mixed with Penderyn Welsh whisky. Coffee will be provided by Allpress coffee and they'll be working with local breweries to showcase craft beers.

You can find out more from Flat Iron from them directly on Twitter.

Flat Iron opens above the Owl & Pussycat at 34 Redchurch Street, Shoreditch on July 18 for a six week residency.