Top London restaurants to order grouse from the Glorious Twelfth 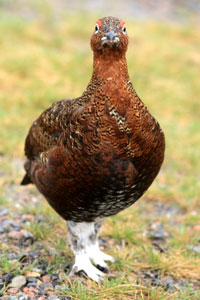 The Glorious Twelfth has arrived (the start of the grouse shooting season for those of you who don't possess plus fours or a Purdey), so naturally our minds at Hot Dinners are taken up with game chips and bread sauce – the perfect accompaniment to the grouse which will be winging (if you’ll excuse the pun) its way to London restaurants from today.  Here’s five places we’d recommend ordering it.

The grouse at Corrigan’s comes from Reggie Johnson’s Farms in Lancashire, a beautiful spot well known for the quality of the rare-breed meat raised. Try Corrigan’s Grouse Pie stuffed with Duck Fat, Savoy Cabbage, Foie Gras and Thyme. Better still, the first 20 diners ordering grouse will get a free dram of Dalmore Whiskey (worth around £200 a bottle).

Phil Howard is putting grouse on the menu at The Square from today onwards. His dish will be - Roast breast of grouse with a croustillant of the leg, crushed turnips and blackberries.

Read reviews and see contact details for The Square

The Grill at The Dorchester

Head chef Brian Hughson, who gets his grouse from the Yorkshire moors, has a full Glorious Twelfth menu ready to go, including roast grouse, grouse pie and – for city softies – a grouse salad with pickled Scottish girolles, wood sorrel, loganberry dumplings and reform sauce. Menu available from 13 August.

Henry Harris is giving a distinctly gallic flavour to his treatment of the bird, serving up roast grouse with Armagnac gravy, bread sauce and a fois gras crouton for £27.50 from 7pm tonight.

Even though the restaurant closes this Sunday to add the new Oyster Bar & Cafe, Rowley Leigh could not completely miss out on the beginning of the grouse season, so there will be a limited number of birds available on Friday and Saturday. Rowley will be serving grouse in two ways, traditionally and then as two breasts sandwiched with Iberico lardo and served with red wine jus and borlotti beans. The restaurant will continue to serve these dishes when it reopens on Thursday 2nd September.

But that's not all - other restaurants that will serve grouse are: