[SIGPLUS_EXCEPTION_SOURCE] Image source is expected to be a full URL or a path relative to the image base folder specified in the back-end but /blog/2013/fortnums/gallery is neither a URL nor a relative path to an existing file or folder.
0
Shares 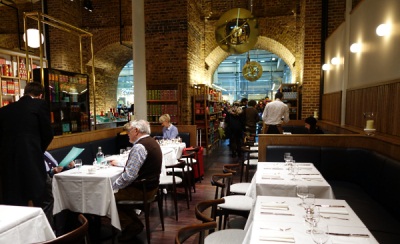 Fortnum and Mason's first new UK store for 307 years officially opened its doors today at St Pancras and Hot Dinners popped by for a quick look at what they're serving up. In addition to stocking all manner of teas and preserves and the ability to order hampers here, they have a small sit-in restaurant towards the back of the store with eight tables.

Breakfast, which is served from 6.30am to 11am starts at £3.50 for toast and crumpets served with Fortnum's preserves and ranges through pastries, porridge and muesli. There's also a bacon roll for £5.75, kedgeree (£8) and Highland Scramble (£11).

From 11am the menu moves to savouries like fish pie (£14, pork pie (£10) and braised beef (£12). From a quick comparison between the menu here and that in the Piccadilly store, there looks to be a few new dishes here including several tarts - a savoury Stilton and red onion tart (£8.50), treacle tart and chocolate tart (both £6). Other novelties include several 'foreign' dishes under the En Route section - Quiche Lorraine (£8.50), Toulouse sausage cassoulet (£10.50) and apple strudel (£5).

But by far the most popular option is bound to be the sit down afternoon tea service which is just £29 here in comparison to £40 in Piccadilly. The menu here is slightly shorter, so there's a choice of three sandwiches at St Pancras as opposed to five in Piccadilly and you get two scones - one plain and one fruit as well as a selection of afternoon tea pastries and a pot of tea. There's also a whole host of Fortnum's and single estate teas to choose from.

If you just want to jump in for a quick scone, slice of Victoria Sponge and a cup of tea too, that's catered for as well. Or if you don't have time to sit down at all, there's a hamperling for two to go with tea and scones plus clotted cream.