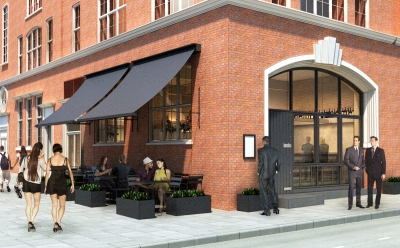 Anyone who's ever stood in line at Sam and Eddie Hart's Barrafina on Frith Street silently willing those scoffing on stools to move on will no doubt be pretty excited at the thought of a second branch of the tapas bar opening on Drury Lane next year. Now Hot Dinners has been given an exclusive peek at the what the Covent Garden venue will look like.

Andy Martin architects, who were behind the original Barrafina, have been brought in again to create the new restaurant. There'll still be a long bar to sit at looking into the kitchen, but the Drury Lane branch will also have a function room in the basement with a large glass enclosed wine and sherry cellar.