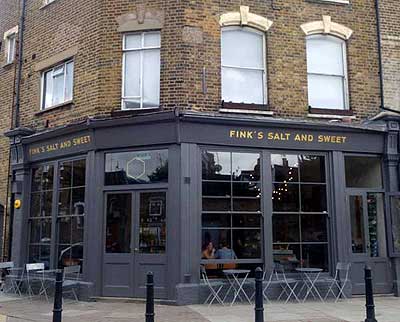 Proof that there very much is a God and that he's been listening to the prayers of the Hot Dinners team, is the opening of Fink's in our manor.

Blackstock Road is a great place to get flatbreads and amazing Algerian spitroast chicken, but it's not blessed with that many decent places to eat out. So when a neighbour mentioned that a promising new cafe/deli had opened just off the main road - we were right on it.

Fink's Salt and Sweet has been open for about six weeks and is the brainchild of two locals. Jess, an artist used to use the building as her studio. Mat worked for the Soho House Group before moving into hospitality for the TV industry.

A desire by Jess to use the corner site for something other than art and from Mat to focus his career solely on food and drink made the pair a perfect match. They both loved the area, but as Jess notes "the only thing missing around here was somewhere to have a glass of wine and a nice bite to eat."

Fink's aims to fill that gap. The food's billed as "Your Fridge. But Better." So expect lovely coffee, sandwiches and salads during the day, moving to more substantial fare in the evening. Right now everything is cold - so dishes include roast sumac chicken served with creamy lemon, crispy onion and mixed leaves (£8) or ribboned courgettes with raw beetroot, fresh peas, ricotta and lavash bread crisps (£7). But as the nights close in there are plans to put more hot dishes on the menu as well as serving more family-style mains.

There are cheese, charcuterie and pate boards ranging from £7-£15 and at the weekend a brunch menu includes the usual suspects (although no eggs benedict) as well as Hansen and Lydersen thick cut smoked salmon with radish and goat curd (£9) or bacon jam on an English muffin with crumbled Sharpham Rustic (£6).

A thoughtful, small wine list kicks off with two lovely house wines starting at just £3 for a 125ml glass. One is a Mount Etna rosso - the other is a Vermentino, made by nuns in Sardinia. There's none of the latter right now because an insanely busy first six weeks means they've run out of it, and the nuns have been on holiday for August. Bottled beers are from Kernel and Meantime and there's a daily changing cocktail too.

With space for 35 inside and 10 outside, Fink's is larger than other local cafes and there's an obvious space in the back room that's made for private parties. They also operate as a deli.