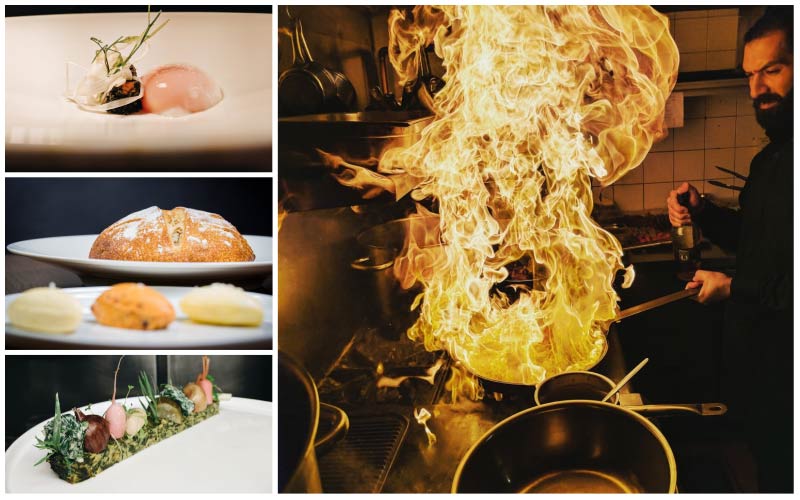 What: The Drunken Butler

In a nutshell: International, innovative sharing plates and bigger dishes

Summing it all up: Yuma Hashemi has been all over, from Portugal to San Francisco. Now he’s opened his first ever solo restaurant in London. It’ll be loosely French themed, with a Persian and Korean twist, and you can expect to see more than a bit of preserving and fermenting...

What happens when you mix French, Persian and Korean cuisine, and throw in a chef with a love of fermenting? The Drunken Butler, a brand new restaurant in Clerkenwell from the former head chef of The Chancery.

It’ll be the first solo project from highly international chef Yuma Hashemi, who’ll be bringing together experience gleaned not only in his hometown of Berlin, but in Sweden, Portugal, Bordeaux, Chicago and San Francisco, until eventually landing in London’s The Chancery. The chef has now settled on Rosebery Avenue as the home of his new venture, where he’ll be exploring all those interesting flavours through the medium of fermenting, smoking, salting and pickling.

So that’ll mean dishes like salt-pickled vegetables with wild sorrel and borani - yoghurt with spinach - plus oyster kimchi with cucumber, and a Persian-style omelette called coucou sabzi.

Other dishes we’ve been told to expect include:

Prices will range from around £5 for a sharing dish up to £25 for larger plates, and there are plans for a £40 tasting menu which will span five courses.

Caffeine junkies will also be pleased to know that coffee will play a central role in the restaurant. “Coffee is a very important part of my concept,” he says. “It will be served by a professional barista, using only speciality coffee.”

The restaurant will be open for lunch and dinner and be able to seat around 30 at first, with space for 6 outside and expect a big open kitchen too.

More about The Drunken Butler

Where is it? 20 Rosebery Avenue, London EC1R 4SX