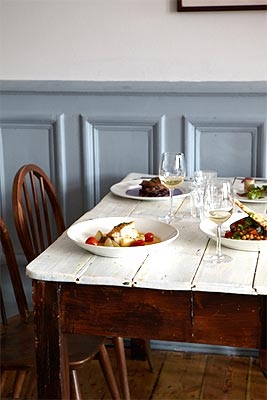 It's great to see small local restaurants being creative in where they open - for example Brixton's Salon which now occupies the room above deli Cannon & Cannon. Now a new restaurant, Claude's Kitchen, has opened in the space above popular champagne bar Amuse Bouche in Parson's Green.

Claude's Kitchen, which opened this week has a short and 100% sustainable menu which changes weekly. In the kitchen Claude's reunited with friend Pete Hartley-Booth whom he worked with at Petersham. The team are apparently determined to maintain the same quality of ingredients that they worked with whilst training in Michelin-starred kitchens; without the price-tag. So expect dishes like wood pigeon, caramelised chicory, baby plum tomatoes, thyme and lavender; free range pork belly with quince puree, sweet potato mash, crackling and romanesco and for dessert, bitter choc parfait, boozy figs, parsnip and white choc emulsion with a beetroot crisp or Murcia Al Vino DOP goats cheese with salted Marcona Almonds and lavender honey.

The restaurant is open from 6pm Tuesday through to Saturday and seats 40. They also supply a bar menu to Amuse Bouch with food inspired by Green Goat Food which is available every night of the week - so there's parma ham popcorn £2.50), Iberian lomo with shaved fennel and hazelnut (£6) and beef brisket sarnie with gribiche £5.