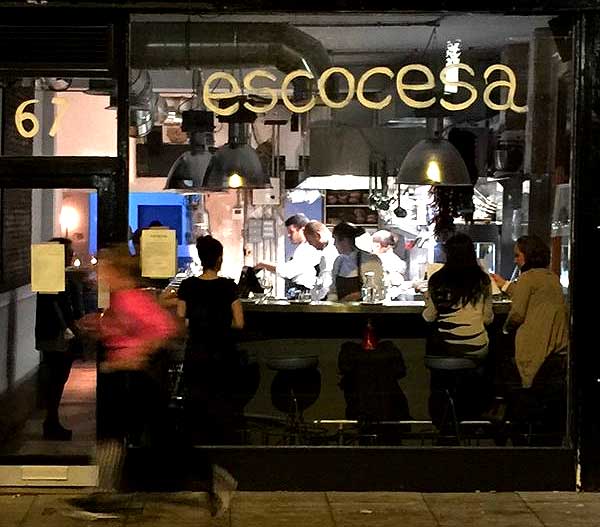 A 15-year-old Guardian article saying that all the best Scottish seafood left Scotland headed for Spain, as there was no domestic market for the more esoteric or indeed expensive catches, stuck with Stephen Leroni, owner of new Stoke Newington restaurant Escocesa.

The former music producer opened his first restaurant Bar Esteban in 2013 in Crouch End with Pablo Rodriguez (ex Barrafina and Moro) and Naroa Ortega. Pablo served time in Michelin star restaurant Jean Luc Figueras in Catalunya, before coming to London and working in Barrafina and Moro. Naroa worked front of house in some of the best restaurants in the Basque country.

For the team's new Stokie restaurant, they've brought in head chef David Herrera who has worked at Arzak in San Sebastian, then the Waterside Inn and Barrafina.

They describe Escocesa's ethos as "hi-jacking some of the best Scottish seafood on its way to Spain and serving it along side some of the best Spanish produce, wines and sherries." Sound bloody marvellous to us.

Fittingly for some of the team, the new Church Street spot will feel familiar to any Barrafina fans. There's an open kitchen with 14 counter stools, a bar space and a further dining area with room for 50 diners.

As for wine - expect an all Spanish wine list with a focus on Catalunya and sherries from Jerez, Sanlucar de barrameda and Puerto de Santa Maria.

Escocesa is now open at 67 Stoke Newington Church St, London N16 0AR. Keep up with their news on Twitter @escocesaN16