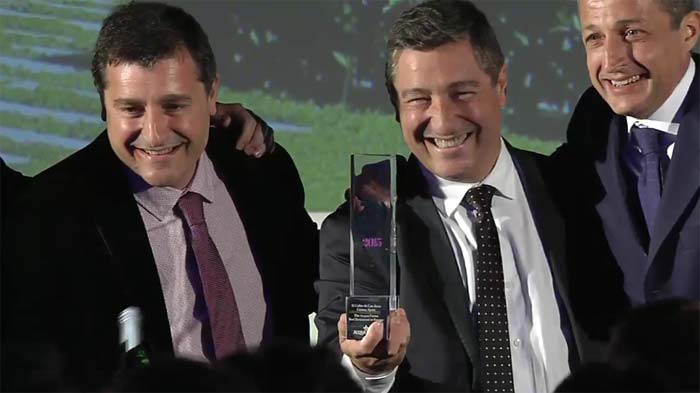 Once again the world's movers and shakers in the restaurant industry filled London's Guildhall for the 14th World's 50 Best Restaurants awards. "This year's event marks the end of an era," Group Editor William Drew told the audience, "as we'll be leaving the Guildhall, London and the UK. In 2016 it will be held in arguably the worlds most exhilarating dining destination New York City." Well phooey to that, say we.

Anyhoo - to the events of the night. We'd already found out the 51-100 portion of the list last week, when in a break with tradition, organisers released that part of the list earlier. The biggest news of the night, of course, was the return to the top slot for Spain's El Celler de Can Roca which last year lost out to Noma. Frankly, it wasn't the best of nights for UK restaurants. Last year we had two in the Top 10 part of the list and three in the Top 50. As The Ledbury dropped 10 places to No 20, that left just Dinner by Heston in the Top 10 at No 7, having gone down two places.

But in the manner of seeing the best of everything, we're happy that chef Virgilio Martinez, who is also part of Lima London did so well, and we're going to completely big up the British background of Sydney's Sepia whose chef Martin Benn was born in the UK and trained under Marco Pierre White at The Criterion before emigrating to Australia in 1996. Of the big events of the night, Helene Darroze picked up Best Female Chef, pointing out that from next week there would actually be more women than men working in her kitchen in Paris. And Daniel Boulud was a very popular winner for the Lifetime Achievement Award.

For more, check out our full list of the World's 50 best Restaurants 2015