Eeemaal solo dining restaurant to pop up in London's Soho 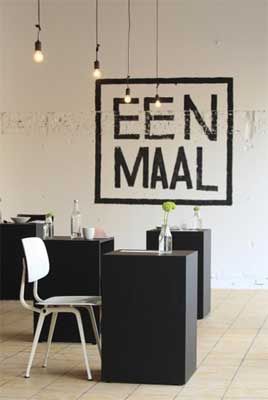 There's been a lot of talk that EENMAAL, the pop-up restaurant for folk dining solo, was coming to London. It's now been confirmed that it'll hit Soho for two days at the end of January.

The Dutch restaurant caused something of a media storm last year when it opened in Amsterdam, kitted out with tables for one and no more.

EENMAAL's creator Marina Van Goor and her team have been lured over to London for the pop-up by mineral water company glacéau smartwater. Her two course menu will be bespoke for this city and dishes will be served up with the water - billed as "the uk’s first vapour distilled spring water".

The idea is to encourage Londoners not to lunch al-desko for one day but to enjoy a proper lunch break in their own company. And the best thing is that it'll be completely free.

EENMAAL will be in London from 29-30th January 2015. To find out how to book tickets you'll have to follow @glaceau_sw on Twitter where they'll release details on 22 January. There will be three lunchtime sessions on Friday, and one on Thursday, and guests will have a main course with the choice of either a starter or dessert.