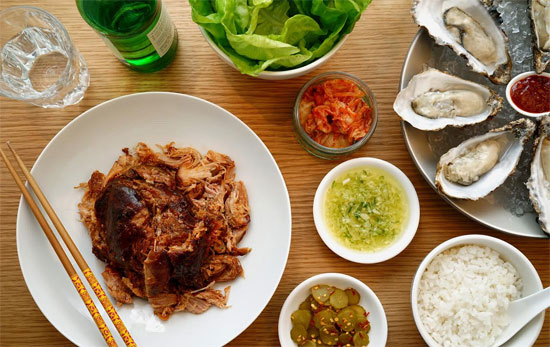 We're partial to a bit of BBQ at Hot Dinners so news of Bó Drake a new East Asian BBQ restaurant coming to Soho perked us right up.

The 60 seater restaurant is opening on Greek Street (taking the place of Disiac) and will be combining British seasonal produce with an emphasis on smoked cooking methods, as well as the more traditional sweet and pickled influences from South-East Asia.

Heading things up is Jan Lee, who was formerly at Roka and  who "grew up in his parent’s restaurants along the Scottish borders." He's been inspired by a combination of his Chinese heritage, British upbringing, travels throughout East Asia (while the leader of Glasgow band Shitdisco) and also his South Korean wife who "introduced me to the life changing, fiery and flavoursome Korean cuisine."

He's teamed up with Head Chef Heath McDonald whose experience on Californian street trucks brings a new element to Bo Drake's menu. He'll be bringing  low and slow BBQ methods and smoking techniques into the kitchen. So when Bo Drake opens, there will be East Asian BBQ dishes beside New Mexican options inspired by the US Korean/Mexican BBQ street food revolution "championed by Roy Choy and his ‘Kogi’ truck fleet, all using Great British produce where possible with an emphasis on smoking and pickling cooking methods".

So on the menu will be the following (prices ranging from £7 to £24 for sharing dishes):

Cocktails at the bar will include the ‘Cucu Sour’ – gin & cucumber served straight up in a coupe glass and the ‘Soju Dela Vide’ – a soju, mescal & strawberry slushie. There's also craft beer on tap is from Camden Town and Brooklyn breweries and a short wine list.

Bó Drake will opens at 6 Greek Street, Soho, London W1D 4DE on Thursday 12th February at 6pm. There will be a soft launch from 7pm February 5-7th too, with 50% off food. It's no reservations, so just head on down.