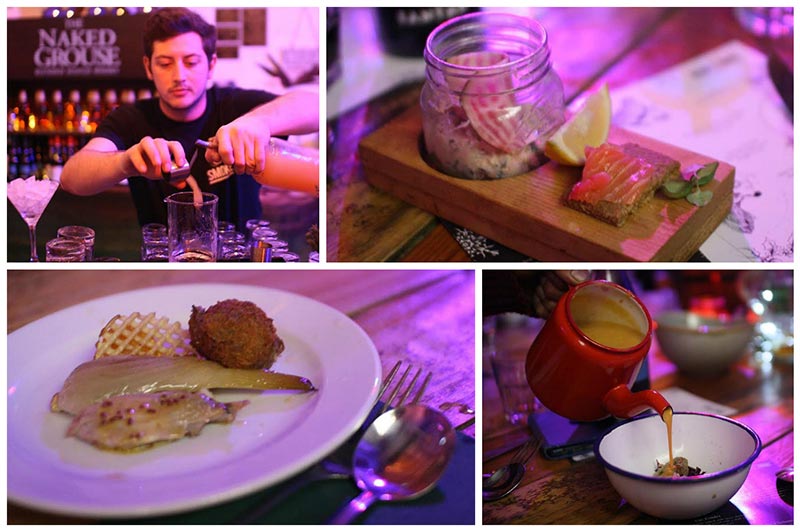 Update - 16/12/16 - Hot Dinners went down to get into the highland spirit at the repurposed former tannery in Bermondsey.

Hot toddies immediately in hand, a floral winter warmer with plenty of citrus to offset the earthiness of the Naked Grouse whiskey (of which there was plenty throughout the evening), we were welcomed to our table.

The first course was a deliciously, rich partridge with pear, emphasising the theme of Christmas from the offset, with game chips, and included a deep-fried ball with a hearty meat filling. It was followed by sloe-cured salmon and pickled cucumber.

Next, it was onto a spiced pumpkin soup, one of our favourite dishes, which we served ourself from red teapots passed from person to person on our 10-seater table. This was a perfect, comforting dish for winter nights. At the bottom of our bowls, salty, braised brussel sprouts lying in wait, easily capable of winning over sprout skeptics (ourselves included.) A generous sprinkle of a crunchy haggis crumb rounded off the dish perfectly.

The final savoury course once more invited a bit of table DIY spirit, in the form of a massive venison and bone marrow pie with Buckfast cranberry sauce, which lacked any trace of its former, caffeinated tonic wine form. We finished up with a massive tray of hot brownies topped with freshly toasted marshmallows, two big pots of whiskey ice-cream and a huge bowl of pickled cherries, which we helped ourselves from greedily.

Cosy up in London Bridge with hearty Scottish produce, hot toddies and tartan blankets as Dram & Smoke return once more for an ultra-festive winter pop up.

Taking place in an atmospheric old tannery, there’ll be Christmassy vibes aplenty along with live music, big communal tables and lots of candlelight. For £45, you’ll be able to avail of the five course festive feast of a menu, which is rife with highland-inspired treats. You’ll start with a hot toddy and a serving of partridge and pear, which comes with with game chips and clementine, followed by beetroot and sloe gin-cured smoked salmon. Up next will be brussel sprouts in a warming pumpkin soup topped with a ‘haggis crumb’.

The main event will be the wild venison and bone marrow pie, with all the trimmings and cranberry sauce made with - wait for it - Buckfast. For pudding, tuck into the chocolate chestnut brownies and pickled cherries, with a healthy dollop of whisky ice-cream on the side.

Once dinner is out the way and it’s back to merrymaking, there’ll be more seasonal hot toddies and tipples than you can shake a stick at - from Naked Grouse whisky to mulled cider, egg nog, Scottish gin, wine, craft beer from the Harviestoun Brewery. Or try a potent Old Fashioned, which will be available, somewhat worryingly, on tap.