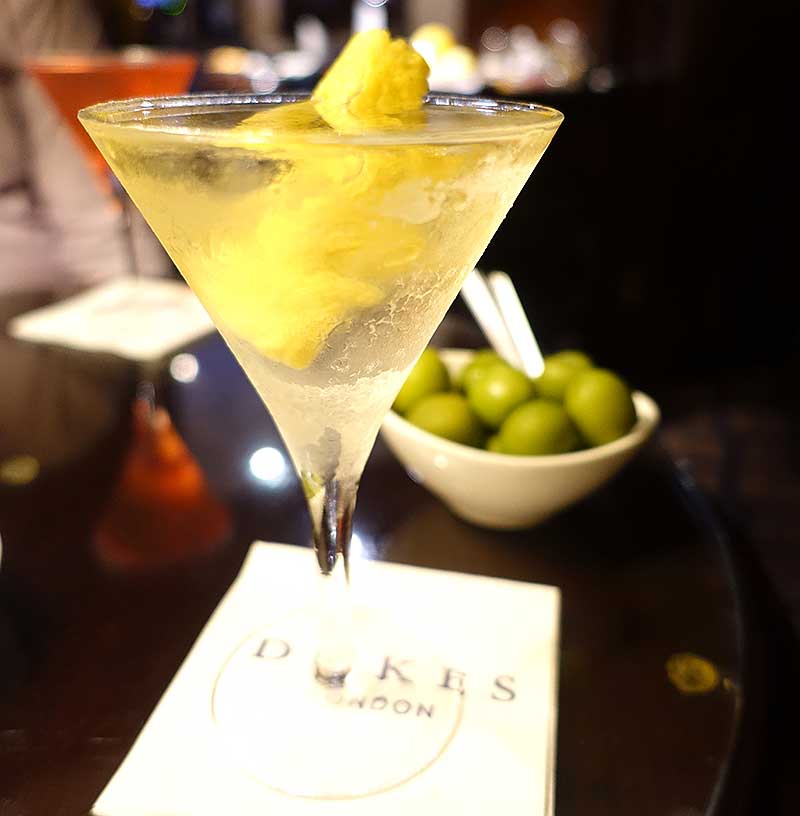 Given how much we, or at least I, love martinis - it's a mystery as to how it took so long to get around to trying those at Dukes. Because, if you didn't know it already, the St James hotel has forged quite the reputation as purveyor of the best in town.

What Dukes has going for it, in spades, is history. It used to be the favoured watering hole of the James Bond creator, Ian Fleming. Legend has it that the author came up with Bond's catchphrase 'shaken not stirred' line as a result of his frequent trips here. Whether he also was inspired to create the Vesper Martini as a result of drinking at Duke's is less certain, but it's  obviously a great story.

The current bar forged a real reputation for itself under the care of Salvatore Calabrese (now to be found at his sons' place, The Mule Bar, in Spitalfields). It's currently being looked after by bar tender supremo Alessandro Palazzi. Sadly, he wasn't there when we visited, but we did get a masterclass in creating the perfect martini nevertheless.

The cocktail menu runs to several pages of martinis - all at £19.50. Order one and you'll get the martini trolley arriving for a bit of tableside theatre. Our vodka martini was made with Potocki vodka, some extra dry vermouth made exclusively for Duke's by the Sacred distillery in Highgate and some unwaxed Amalfi lemon zest.

As to whether it's London's best martini - we had two, they were excellent. Then we stood up to leave the bar and the rest of the evening is a total blur. So yes, great martinis. But LETHAL.

Dukes Bar is at Dukes London, 35 St. James’s Place, London SW1A 1NY. Opening hourse are from Monday to Saturday 2pm to 11pm and on Sunday and Bank Holidays from 4pm to 10.30pm. You can't reserve tables.