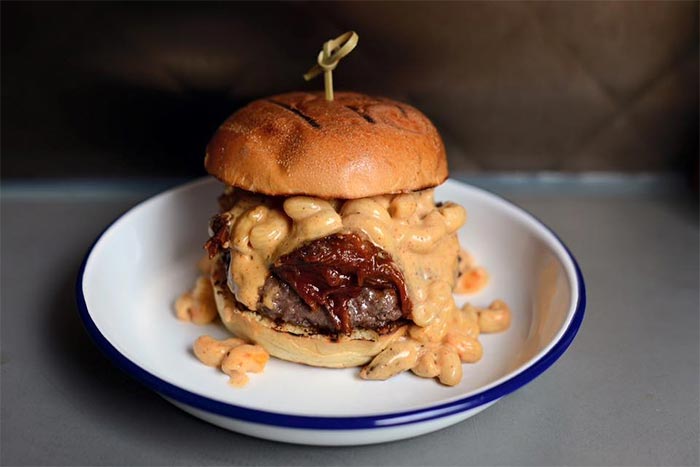 If you're in East London and ever fancied a Dirty Bones's Mac Daddy (a burger covered in Mac n Cheese which is VERY good), you soon won't have far to go. They've just announced their third outpost, opening in the heart of Shoreditch.

They're opening around the corner from Beach Blanket Babylon with their latest, a big space that's taking over a Grade II listed building. You can expect a similar menu to the other Dirty Bones - so that's a combination of fried chicken, burgers, ribs, dogs and more. And that Mac Daddy will definitely be making an appearance. There are also the amazing sounding Cheeseburger Dumplings - homemade gyoza stuffed with aged burger mince and melting cheese,

As for exclusives, they're bringing something new to the table at Shoreditch as they'll be putting on their first ever breakfast menu. That will have Dirty Buns (including the Truffled Chilli Cheese Bun), Matcha Custard French Toast and Bourbon Poached-Pear with Banola. Sunday lunch is new too, which adds Brisket & Ox Cheek, Spiced Buttermilk Fried Chicken, or Beet & Portobello Melt - served with gravy and all the trimmings. Or if you can;t choose, there's the Table Roast, which includes all three Dirty Roasts, three homemade gravies and a platter of sides to share - that's for four or more people.

They'll also have a big bar space with live music and expect their bottomless prosecco brunches too.

Dirty Bones Shoreditch opens 7 September 2016 at 1 Club Row, Shoreditch, London E1 6JX. There's a soft launch with 50% off food from 7-13 Sept and 25% off from 14-21 Sept. Bookings for that open on 7 September on their website. For more, follow them on Twitter @DirtyBonesLDN.