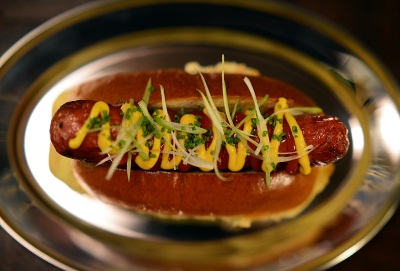 Up until now a look at new openings in London over the past year would reveal a distinct East/West divide in terms of the type of establishment. To the West, there be gastropubs, salad spots and art gallery restaurants, to the East, a land of Korean pop-ups and dude food joints. But now Kensington is fighting back with the opening of Dirty Bones this week.

Sounding like a mash up between Dirty Burger and Flesh and Buns, it's actually a restaurant of two parts. By day it'll look for the world to be a basic hot dog kiosk serving up one classic Yankee dog (served with yellow mustard, red ketchup and spring onions). At night a hidden door to the restaurant downstairs is opened, where they'll be serving up an extended hot dog list and also the 'bones' part of the menu plus what looks to be a great cocktail list.

What really sets this restaurant apart is the involvement of Group Creative Development Chef, Ross Clarke (who was previously at the Fat Duck Experimental Kitchen - and helped come up with dishes for Heston’s television series and books.). His dogs will use high quality British sausage meat and versions include The Brit (served with treacle bacon, mature beer cheddar and English mustard); The Asian (served with kimchi relish, crispy seaweed and wasabi mayo) and - wait for it - The Burger Dog.

The kiosk at Dirty Bones opens from today and then the restaurant downstairs will open from 6pm on the evening of Thursday 16th January 2014. And if you fancy a free hot dog to test things out, head down to the kiosk betwen 11.30am and 3pm from 14-16 January for a free dog (while stocks last).