Diners Union supperclub with a heart opens in Shoreditch 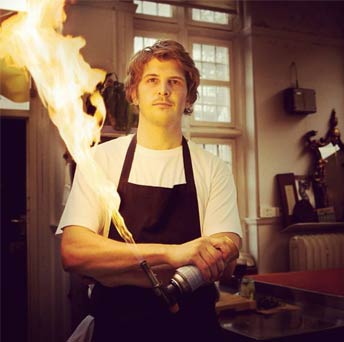 The bank holiday weekend may be over and there are months stretching out between now and the Christmas hols, so in an effort to make you all feel better, let us bring you the story behind new Shoreditch supperclub Diners Union. Truly it's a story to warm the cockles of your heart. We caught up with team member Cameron and threw a couple of questions his way to find out what distinguishes them from so many other London supperclubs. Answer: a lot.

What can you tell us about how and why Diners Union was set up?
We set up Diners Union to keep what we like call 'Ronnie's World' alive. Ronnie was co-founder (and head Chef) Rolan's granddad and was a complete legend, loved by all who met him. He died about 5 years ago but his outlook on the world is survived by many people. Ronnie was an optimist, saw the best in people and just wanted everyone to get along. His values manifest themselves in many ways at the venue and in our methodologies, but bringing people together as equals ('everyone pays the same, everyone gets the same) is probably the key message that we try to communicate that Ronnie instilled in us.

So what sort of things are going to be on the menu?
We are changing our menu every week, including vegetarian options. Our food draws its inspiration from working class traditions around the world at different points in time. So, for instance, week 1 is Victorian London but then week 2 is French Revolution (and week 3 is Italy 827AD). Once we've launched (Saturday 31st) we are open every Friday and Saturday until at least the end of the year, so we're going to have done some serious air miles and time travelling by the time we're done. All our vegetables, meat and fish are certified organic as well.

How long will Diners Union run for? And are there any other projects you're working on too?
At least until the end of the year, but probably longer. The restaurant being open is just a start. We are partnered with St Mungos (www.mungos.org) and are housing, training and setting up a restaurant for a group of homeless Londoners. We might open on other days but we have other intentions than just selling food, like running a fine dining evening in place of a soup kitchen for the homeless. We've got a lot of partnerships in place and are exploring anything we can do to promote sustainability, caring for the community, responsible farming and helping people to help themselves (such as free cookery classes). We have big plans and we can honestly say that Diners Union and our actions don't revolve around money (otherwise we'd be charging £40 or £50 for our menus instead :-).

Diners Union offers a five course meal for £15 and opens on Saturday 31 August. Everyone pays the same. Everyone gets the same. 5-7 Rivington St. Shoreditch. Every Friday and Saturday. For more information see their website dinersunion.co.uk or follow them on Twitter @dinersunion. They're booked up for the first weekend, but tickets are now on sale for the second weekend's French Revolution - email them at bookings@dinersunion.com to book.