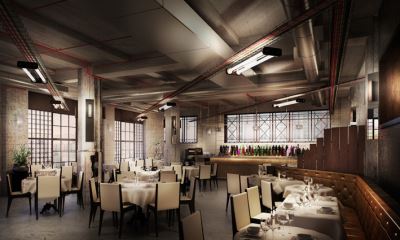 It's been the scene of frenzied booking since telephone lines opened last week, with over 2500 bookings in the first few hours. But now just two weeks before opening it transpires that Gordon Ramsay's Union Street Cafe is not, as was widely reported (including here on Hot Dinners) a joint venture with David Beckham.

After Hot Dinners asked the chef's PR company for clarification today we were told that "David Beckham is not involved in Union Street Cafe".

So how did the world's media come to think he was?

It began with an interview Ramsay gave to the Sunday Times back in February when he joked that Beckham was going to be his sous chef and the article went on to state that "The former England captain is investing some of his football fortune in the chef’s newest venture." That was confirmed when we received a press release in June which stated that "Union Street Café is also supported by David Beckham". It all seemed to be straightforward enough and both Beckham and his wife Victoria were snapped looking at the restaurant site in July.

But in a news story by The Sun this week a friend of Beckham's told the paper; "David was just looking around Gordon's new restaurant and it's been misinterpreted that he was investing in the place. There was an option for David to invest early on but he wanted to stick to opening somewhere that would sell his own favourite grub." It seems that Ramsay and Beckham are going into business together, but that's likely to be a Pie and Mash chain instead.

All the confusion can't have hurt the pre-publicity for Ramsay's latest spot in Southwark which last we heard was already booked out through to November.

Union Street Cafe will open at 47-51 Great Suffolk Street, London SE1 0BS on September 16 2013. See what all the fuss is about by booking on their website.