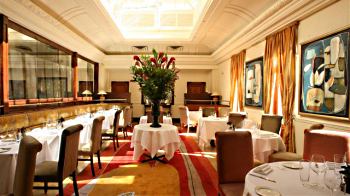 Hot Dinners have been following with interest the story of the penniless Latvian filmmaker who embarked on a fortnight of scamming some of London's most expensive restaurants by enjoying lavish meals and then scarpering without paying. This week Janis Nords appeared in court over three charges of making off without payment. He also asked for six other similar offences to be taken into account.

Over a two-week period, Nords and his girlfriend enjoyed the following meals:

A £349 dinner at the Glasshouse in Richmond
A £1021 dinner the L'Oranger in St James
A £965.40 dinner at Helene Darrose at the Connaught
A £573 dinner at L'Autre Pied
A £570 dinner at Pearl restaurant in Holborn
A dinner at Le Circle.

One entertaining detail which has emerged was that the high-maintenance girlfriend that Janis was apparently trying to impress with these dinners actually lives in a Latvian squat, according to the prosecutor who said; 'It turned out she was herself penniless, and was very rude to officers when they arrived, and said she would have their jobs.'

Nords has now been banned from entering London's poshest postcodes for 12 months (that's W1, WC1, WC2, SW1, SW3 and NW1 in case you were wondering) and will be back in court in three weeks where he's being ordered to show how he plans to repay the restaurants he did a runner from.