Cucina Rustica will be next to pop up in King & Co, plus Crafty Pies and Vibrant Forest 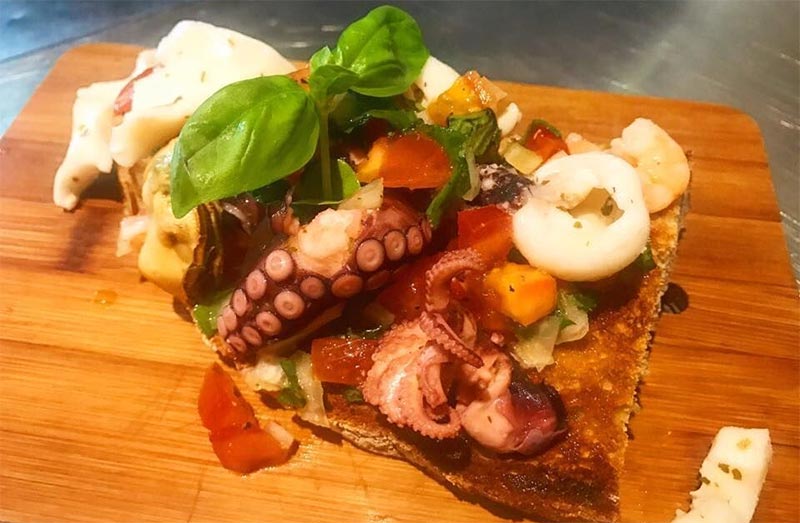 If you hear the word ‘pop-up’ and ‘Clapham’ in the same sentence, it’s reasonably safe to assume the next ones are be ‘King & Co’, Clapham Park Road’s stalwart boozer and host to seemingly non-stop kitchen residencies. New for August, to squeeze out even more of those much needed summery vibes, there’s a Sicilian residency on the way from Cucina Rustica, who’ll bringing with them all the sundrenched Med cuisine you could want.

Sicilian meatballs, antipasti, a range of bruschetta with lovely toppings like parma ham, figs, and ‘nduja and seafood (that's the latter above). And those Arancini Rustica mozzarella risotto balls from the Duke’s Head will all feature on the menu.

There’ll also be some “grande plates” if you’re seriously hunger, like Pumpkin Tortellini that’s been freshly made, and the enticingly carby Doughnut Gnocchi for pudding, filled with molten Nutella. We’re not quite sure how you can blend potato dumplings with deep fried dough but you can bet we’re keen to find out.

The Cucina Rustica residency will be following a week long stop in from Crafty Pies, who know how to make a mean pastry or two if their finalist position in the British Street Food Awards is anything to go by. They’ll have fillings that go a bit further than your usual steak and ale - think Whisky Smoked BBQ Pulled Chicken or even one with a burger inside topped with a brioche bun.

There’ll also be a one off event on Thursday 10 August for hardcore beer lovers when Vibrant Forest, a microbrewery from Lymington, rock up with their kegs and casks beers, including vegan beers and free samples (the best kind of samples.)