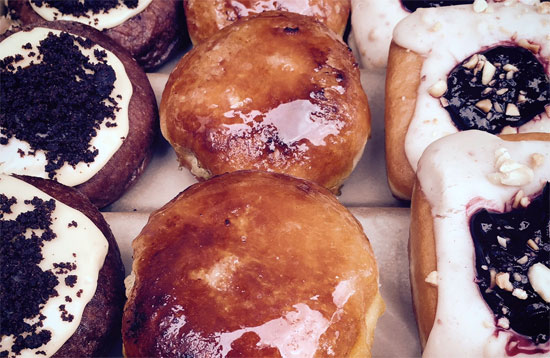 We're big fans of Crosstown Doughnuts here and so we're very pleased to reveal the news that they are planning a new permanent shop that'll be opening in Soho in Spring.

The new shop will follow the success of their successful Piccadilly Station pop-up that's finishing up in May. As JP from Crosstown puts it, "Piccadilly Circus Station has been a great test for us. I'm proud to say that we have not only turned commuters heads, but converted many into loyal gourmet doughnut and coffee fans. Now it’s time to stamp our authority on Soho."

This will be good/dangerous news to anyone who works in Soho as Crosstown say that a large number of order from their online delivery service are from the area. Now there will be even more temptation to pop out for a quick bite. As for the doughnuts themselves, new flavours are planned (and we'll have more information closer to opening) but you can expect the favourites including:

Plus - they're planning to launch some new flavours: "there will be a summer berry option and we are also working on something with grapefruit. Orange chocolate may also make an appearance soon too."

They'll have coffee too, of course, with a special offer of a 4 or 6 oz coffee and classic doughnut for £3.50 (for example a flat white and vanilla bean glazed ring for £3.50). That coffee will be the new Assembly Coffee and Crosstown will be the first ones to sell that coffee - it officially kicks off at this years London Coffee Festival. They will also be the first in England to serve fresh Prana Chai Tea Latte imported from Melbourne and there will be a a selection of fresh cold press juices and milks from Crude. And inside the store, there will be some stools in case you just need your doughnut fix right there and then.

Crosstown Doughnuts will open at 4 Broadwick Street, London W1F 8HJ on April 27. It'll be open seven days a week, hours TBC. If you can't wait, then you can order online now and follow them on Twitter @CrosstownDough for their latest news.