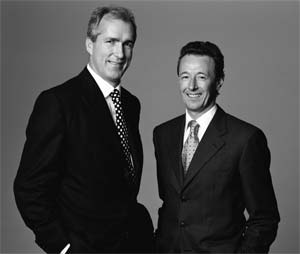 On the eve of the opening of their latest restaurant, Delaunay, Chris Corbin and Jeremy King have just announced another new venture, this time over on Sloane Square. The pair behind the Wolseley will be opening a place on the spot, once occupied by sloaney hangout the Oriel, in the first half of 2012.

In a press release issued today Lord Cadogan, who owns the restaurant's site, said “I am delighted to announce that we have agreed a lease with Rex Restaurants at 50-52 Sloane Square, the former Oriel Restaurant. I look forward to the opening of this exciting new venture in Sloane Square which I am confident will be of benefit to the whole area."

The new 6000 square restaurant will apparently be "a true all-day ‘grand cafe’, providing eating and grazing from breakfast through to later evening".

Let's hope they do better than the former restaurant's owners who didn't have their lease renewed after Lord Cadogan had an under-par meal there. 'I didn't like the food and the prices are far too high," he said, explaining his decision.

Given that Rex restaurants aren't exactly known for their budget fare, it'll be interesting to see what the new restaurant puts on its menu.