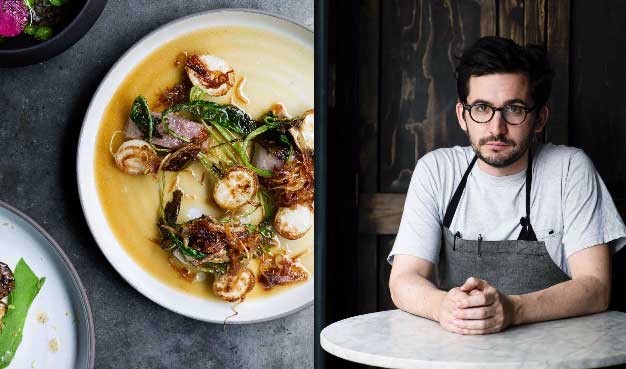 A year on from opening Mission in Bethnal Green, from the wonder wine due Sager + Wilde, is hitting its strike with a whole new team both in the kitchen and front of house. Taking over from James de Jong in the kitchen is Australian chef Sebastien Myers. Myer worked under Nuno Mendes at Viajante before heading up the kitchen at Chiltern Firehouse. He's most recently done a stage at Faviken before joining Mission.

And Seb has gathered an interesting team with him. He's brought in cocktail guru Marcis Dzelzainis of Dandelyan and sommelier Cedric Maillard from Fera at Claridges. Running front of house will be John O’Dowd formerly at St John Bread and wine and Alex Casey who was restaurant manager at Viajante and more recently Sea Containers at Mondrian.

The new a la carte menu will kick off with a serious of snacks such as cured mackerel and rice broth or barley porridge bread after which you can go the sharing plates route or a more traditional starter and main course format. There's also going to be a 5-course tasting menu for £30 per person featuring dishes such as slow cooked lamb with courgette & yuzu and, to finish, pumpkin ice cream, honey meringue & chestnuts.

Mission is at 250 Paradise Row, London E2 9LE. The new menu is running now. Keep up with their news on Twitter @mission_e2