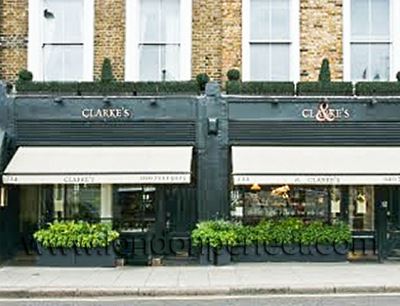 There can't be a better way to celebrate 30 years of being in the restaurant business in London than getting your world-famous mentor to pop over and help you out with the party. That's what's happening next month when Alice Waters of Chez Panisse comes over to London to help celebrate her protégé Sally Clarke's 30 year anniversary at Clarke's Restaurant.

The Californian chef will be in town for four days from 8-11 October to plan the lunch and dinner menus in the style of Chez Panisse for the restaurant's anniversary week. Working alonside Sally in the kitchen will be two Chez Panisse-trained chefs: David Lindsay, now Head Chef to the US Ambassador in Bern, Switzerland, and Claire Ptak, Chef and Founder of East London bakery Violet Cakes. The three course set menus will change daily and cost £50 for lunch and £70 for dinner.

But the really hot ticket will be on Friday 10th October when they hold a fundraising dinner for Alice's Foundation, the Edible Schoolyard Project [ESYP]. The four course gala meal will cost £400 and include wines from California, such as Spottswoode and Nalle, an interesting and informative speech by Alice, a little Clarke's/Chez Panisse/ESYP going home present and more. All profits from the week will be donated to ESYP.

The menus run from 8-11 October at Clarke's Restaurant at 122 & 124 Kensington Church Street, London W8 4BH. To book go to restaurant@sallyclarke.com