[SIGPLUS_EXCEPTION_SOURCE] Image source is expected to be a full URL or a path relative to the image base folder specified in the back-end but /blog/2014/checkonnews is neither a URL nor a relative path to an existing file or folder.
0
Shares 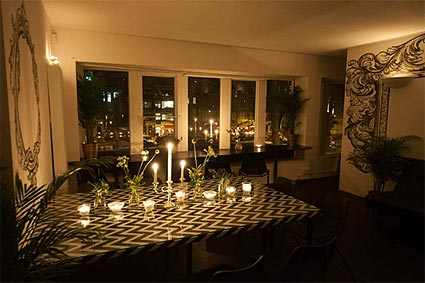 News reaches us of another pop-up that's grown roots as Check On settles down with a restaurant above the Dead Doll's House on Hoxton Square.

Check On are George Craig ("singer, Burberry model and DJ/club promoter") and Terry Edwards, who's worked with Mark Hix and Michel Roux Jr. They're setting up a restaurant called The Pearl, serving "sharing dishes of seasonal British produce".

We do love the way they're referring to the bright upstairs room as a "conservatory", which they hope will be "an indoor picnic with light, fresh plates to graze on and socialise over." We also rather like the look of the starting menu, which includes:

They're planning to run until the Dead Doll's House is closed down, posibly in early 2015 when it will unfortunately be turned into flats.

The Pearl by Check On opens at 35 Hoxton Square, on the top floor of The Dead Dolls House on Saturday April 6 2014. It's open Thursdays - Sundays to start, with a view to opening more days a week soon. You can book online, and for more information, follow them on Twitter.