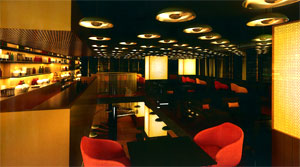 On the site of what used to be the Swiss Centre, New York celebrity chef Jean-Georges Vongerichten recently announced he's opening a London branch of Spice Market, his popular restaurant in the Meatpacking district of New York. spice Market London will be the destination restaurant at the W Hotel on Leicester Square when it opens next year.

The decor of the Manhattan branch was memorably described as 'like the palace of an arriviste Balinese drug lord' by New York magazine and certainly the London restaurant won't be going down the minimalist route. The designers for Spice Market London are Amsterdam-based architects Concrete who were behind the Supperclub restaurants. There'll be gold mesh on the windows, a birdcage spiral staircase and 600 custom-designed shimmering wok lamps all over the ceiling.

As for the food - the concept is based on South-East Asian street food. We like the sound of the Spiced Chicken Samosa with Coriander Yogurt and Cod with Malaysian Chilli Sauce although we remain to be convinced by the Thai Basil and Ovaltine Kulfi. Yes - you read that right. Ovaltine. The restaurant will be on two floors and will also feature a sushi bar and cocktail lounge.