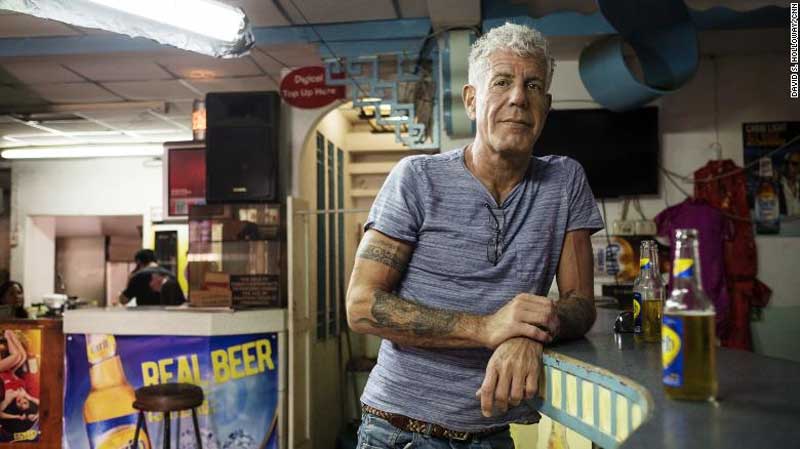 Anthony Bourdain, arguably one of the most famous food celebrities in the world, has died at the age of 61. At the time of writing, information is unclear, but it's being reported as an apparent suicide.

The statement - released by CNN, reads:

"It is with extraordinary sadness we can confirm the death of our friend and colleague, Anthony Bourdain. His love of great adventure, new friends, fine food and drink and the remarkable stories of the world made him a unique storyteller. His talents never ceased to amaze us and we will miss him very much. Our thoughts and prayers are with his daughter and family at this incredibly difficult time."

As well as being hugely influential on the American food scene, in later years he's been just as busy jetting around the globe with his shows about world food, reserving particular love for St John.

“Low plastic stool, cheap but delicious noodles, cold Hanoi beer.” This is how I’ll remember Tony. He taught us about food — but more importantly, about its ability to bring us together. To make us a little less afraid of the unknown. We’ll miss him. pic.twitter.com/orEXIaEMZM

I have to say I’m in total shock to hear that the amazing @Bourdain has just died 💔 he really broke the mould, pushed the culinary conversation, Rest in peace chef 👨‍🍳 🙏 thoughts and love to all his family and close friends xxxxxxxxxxx pic.twitter.com/HB7sV7CeRH

Terrible news about Tony Bourdain. He was a brilliant man, who single handedly changed what food writing could be.

Stunned and saddened by the loss of Anthony Bourdain. He brought the world into our homes and inspired so many people to explore cultures and cities through their food. Remember that help is a phone call away US:1-800-273-TALK UK: 116 123

Such sad news. RIP #AnthonyBourdain Life is beautiful and precious. Always be grateful for it.

Everyone in this kitchen totally dumbfounded to hear the tragic news about Tony Bordain. A kind, generous, and inspiring man for those of us who've known him in person, and also through his writing. A powerful force has been sucked from our world. It is much worse for it.

Heartbroken to hear about Tony Bourdain’s death. Unbearable for his family and girlfriend. Am going off twitter for a while

If you ever need help call The Samaritans can be contacted on 116 123 or email jo@samaritans.org

See also: 10 quotes on food from Bourdain that explain why his work was so important