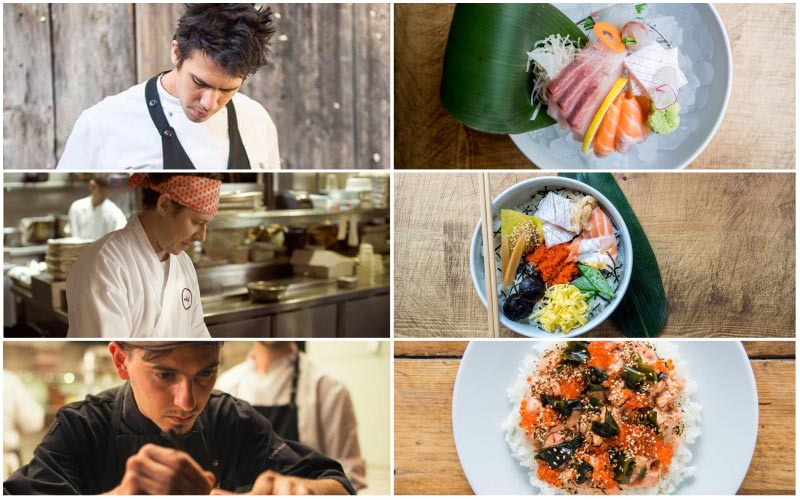 Hot off the heels of their Gezellig pop-up, this July sees Carousel move its residency programme into the Tate’s Level 9 kitchen for three weeks.

There’ll be three very international chefs on the roster from Mexico to Spain to Australia, who’ll rotate each weekend in the Tate Modern’s Blatavaik building, each bringing with them a diverse range of global flavours and fusions.

First up, on the 14-16 July, there’ll be Aussie chef Shaun Presland, who specialises in Japanese cuisine, having spent seven years alone focusing on sushi. He’s studied in Japan under the likes of renowned chefs like Kenji Nishinakagawa and Nobu Matsuhisa, gaining skills he’ll be putting to good use on his menu. Choose from dishes like Hiramasa Kingfish Sashimi, Wasabi Lime Miso with Orange Ponzu and Potato Crisp, and Steamed Miso Chicken Dumplings.

Up next on 21-23 July, there’ll be Sebastian Mazzola and sake sommelière Sussie Villarico who’ll be showing off their love of Nikkei cuisine (Peruvian Japanese fusion). Collectively, the duo, who operate under the moniker Cooking in Motion, and have gained experience in world famous kitchens like NOMA and El Bulli.

Mexican chef Santiago Lastra will see out the residency. Voted one of 10 Best Young Chefs in Scandinavia, the chef has gained an international reputation for his skills in the kitchen, and boasts experience in restaurants like Mugaritz and Bror, as well as NOMA Mexico where he worked closely under René Redzepi. At Carousel, he’ll be cooking up food that draws on his Mexican roots, like Salmon with Roasted Kohlrabi with a chilli-damson jam, Smoked Mushroom Tacos, and Chapulines - that’s grasshoppers, to the uninitiated.

Ed Templeton, Carousel says: “Our open kitchen is home to an ever-changing line-up of talented chefs from around the world who share our philosophy on what eating out should be all about: amazing cooking, friendly service, a relaxed environment and a shared experience from one table to the next.”