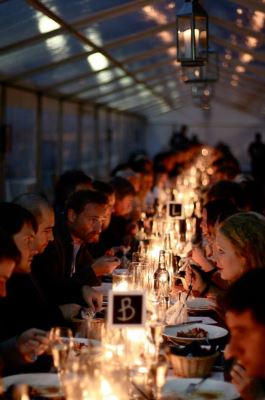 Last year's Butler's Wharf Blackout was a huge success and this September the Thameside restaurants run by D&D London will once again be turning to candlelight for a series of dinners.

As part of the Totally Thames festival each restaurant will turn off their lights and put on candlelit dinners so you can fully enjoy the beauty of the Thames.

The first week will be at Le Pont de la Tour and will be available on the terrace and in the Bar & Gril. The three course menu with drinks will feature a bouillabaisse featuring locally-sourced crayfish from Windsor and silver mullet from the mouth of the Thames.

On the second week it's the turn of The Butlers Wharf Chop House (beef wellington, made with meat sourced from Foulness Island by The Rare Breed Meat Company), Cantina will then run The Sopranos-themed candlelit dinners, with a three-course menu and a drink, using flour from Doves Farm to create its pappardelle, which will be served with a veal ragout and white truffle sauce.

And finally Blueprint Café will host the final week of Blackout with a series of 1920s Prohibition-era candlelit evenings, featuring live music, cocktails on arrival and a three-course sharing menu including a new dish ‘Dining on Bermondsey Beach’, made with H Forman & Son smoked salmon, winkles and edible sand.

To book or for further information on the Butler’s Wharf Blackout which runs from 1-28 September 2014 visit www.bwblackout.com