Burger and Lobster to open in Soho and Farringdon - and take bookings...eventually! 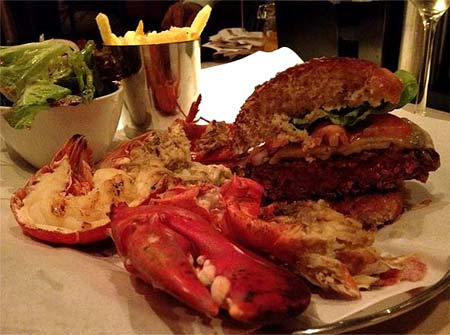 Burger and Lobster has been a massive success since it opened in Mayfair last December and recently rumours had been growing that a new venue was in the offing. The story broke last night that not one but two more Burger & Lobsters are on the way. They are taking over the two London Bistro du Vin sites - on Dean Street and St John Street - with the first to open in Soho by July.

Hot Dinners caught up with Goodman's Dave Strauss to find out more. He told us that the Soho branch will be opening first, mainly because there's less work to do to revamp the place in order to get up and running. Their aim is to open before the Olympics and they'll be offering exactly the same menu as in Mayfair (so that's £20 for either a lobster, a lobster roll or a burger - all served with chips and salad). The menu will include the later addition to Mayfair of the huge 10lb lobsters for £150 that they'll be showcasing in a tank on the main floor.  Elsewhere, they'll of course be installing huge industrial lobster tanks to cater for the hungry Soho masses (and the capacity of these will be larger than Mayfair).

The biggest changes between Mayfair and Soho will be to the bar area which, for starters, will be offering more draft beer. That's still being managed and developed by Soulshakers, so we'll have more news of the later (and update this article when we do).

As for the Farringdon branch, that will take a little longer to revamp. As people who have gone to either Bistro du Vin or Eastside Inn (as it was before) will know, the restaurant has a big kitchen slap-bang in the middle of the restaurant. Much to Dave's regret that's going to have to go (and he's said that if anyone's looking for some top class kitchen equipment, they should get in touch). Once Soho's up and running, the focus will change to Farringdon. There is a possibility that they run a Burger and Lobster "pop-up" there for a few months from October and then fully renovate in the new year - but that's still unconfirmed.

The queues at the original Burger & Lobster have certainly been a topic for much discussion - but the decision not to take bookings was one they had to make with the smaller venue in order to make money. "We understand everyone's frustration over the queuing, but taking bookings would have meant less covers in the restaurant and that would have put the prices up." He told us that they've really tried to make the process as painless for everyone, which is why they put in the policy of calling people when their table is ready. However, the resulting loss of bar revenue clearly pains him as much has he says it pleases Tempo (just around the corner) who just love the amount of people he's sending their way as a result.

Possibly the biggest difference between the new branches and the original is that they will be taking bookings in advance. This is simply based around the fact that the new venues are larger, so they can afford to do so. Dave also understands that people will want to have parties in Soho or maybe take City clients out in Farringdon and bookings are a must for those people (although there will be still be some spaces put aside for walk-ins).

Mayfair will remain as walk-in for at least the foreseeable future, but they're hoping that the new branches will at least cut down the queue there. They want to bring it back to being a restaurant that locals in the area can easily go to, which was their original aim.