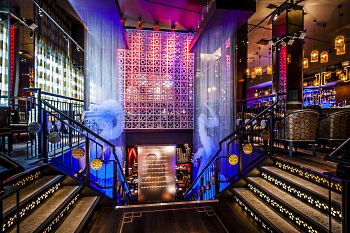 While we've had a lot of queries from readers asking about when Buddha Bar is reopening in London, it's fair to say that the place didn't fare that well with the critics last time around. "The Buddha Bar is where hope, like the ingredients, goes to die," raged Jay Rayner back in 2008, adding, "There will be casualties in the restaurant trade as a result of the current economic turmoil; I sincerely hope London's Buddha Bar is one of them."

Buddha Bar shut its doors on the Victoria Embankment 18 months later. But now it's been resurrected in a different location with new chefs in place, notably the former pastry chef at the Dorchester's China Tang, who'll be knocking up Pan Asian treats such as Chocolate Sesame Bars with Homemade Vanilla Ice Cream, and Mango Pearls with Coconut Cream. On the savoury front there'll be dishes including Venison Tataki, Smoked Duck and Foie Gras Gyoza, Buddha-Bar Chicken Salad, Five Spiced Barbeque Chicken as well as a full selection of Sashimi, Nigiri, Sushi Maki Rolls, Temaki, and Tempura dishes.

The two floor space, with cocktail bar, is massive (it's the old Chicago Rib Shack place) seating 240 in the restaurant, 60 in the Private Dining room and 100 in the bar.

If you'd like to head down and try it out - your best bet is to book in for the soft launch from 26-30 October when they'll be knocking 25% off the food bill.