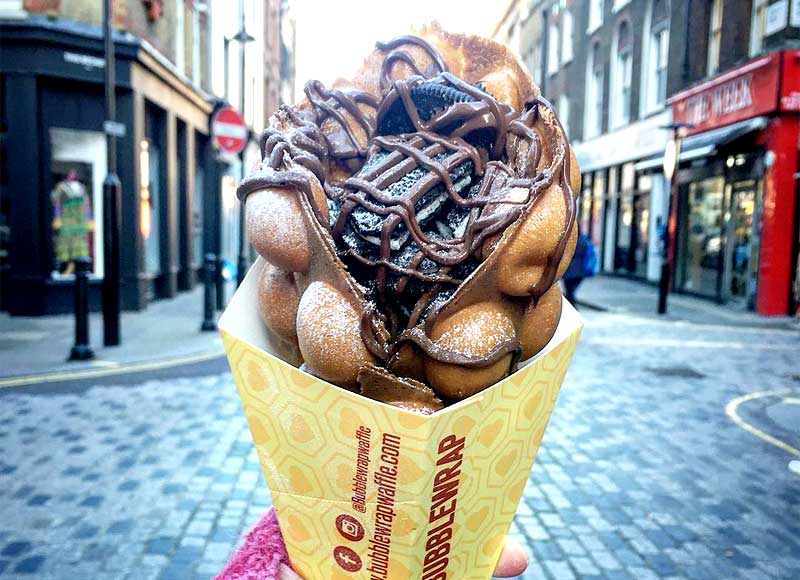 In a nutshell: Hong Kong egg waffle stall puts down roots in London

Summing it all up: After cutting their teeth as a festival food truck, this mix-and-match street food from east Asia is making its way to Soho for good.

Bubblewrap, who can normally be found hawking their sweet egg waffle cones at festivals, will be opening up a permanent shop so Londoners can get their hands on the goods all year round.

If you’re wondering what an ‘egg waffle’ is, it’s more or less a pancake by way of Hong Kong - that is, cooked in a waffle iron, rolled up like an ice cream cone, topped with a generous scoop of gelato and covered in sauce. Egg waffles have apparently been around since the 1950s when they appeared in Hong Kong as a way of using up eggs that were accidentally broken, so the legend goes, before going on to become a popular street snack. It doesn't hurt, too, that they are insanely Instagrammable.

Bubblewrap will be offering plenty of flavour combos for you to mix and match, so you could try a cocoa waffle with berries, sea salt and dark chocolate, or a more traditional matcha waffle with mochi and red bean. Overall there’ll be 14 different toppings to choose from, and 9 sauces including Nutella and condensed milk, so there should be something for everyone. One egg waffle should run you between £6-7, depending on which toppings you go for.

You’ll also be able to get your hands on Hong Kong inspired soft drinks, like Lemon Chill and Silky Milk Tea.

Soft launch: For the first two weeks of opening, Bubblewrap will be offering two-for-one on all their wraps.