Bubba Gump coming to London at the Trocadero 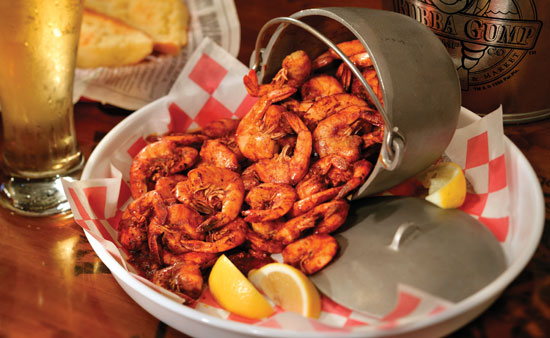 It's been on our Coming Soon list for well over a year - but the UK's first Bubba Gump restaurant is getting closer and closer.

The American seafood chain is best known for taking its inspiration from Forrest Gump and has over 30 restaurants across the globe, including a very prominent one that anyone visiting Times Square will no doubt have noticed. Now work is well underway at their first London branch, with the restaurant taking the place that once held Planet Hollywood.

So yes - it's a theme restaurant with portions that are certainly on the large size (check out the New York menu here) and it has its many, many fans judging by the requests we get about the opening. Frankly speaking, we'd be very happy indeed to work our way though a meal of shrimp in the dozens of varieties they have on offer.

We're told that, for the London opening, shrimp is still at the heart of the menu, in 19 different styles - with fish, steak, chicken, ribs, salads and more also on the menu. Their signature dishes will be Coconut Shrimp, Lobster Linguine, Dixie Style Baby Back Ribs. And there are also appetizers/bites like Mama Gump’s Garlic Bread Basket, Crab Stuffed Mushrooms and the Shrimper’s Net Catch - or the Run Across America Sampler if you fancy all of the above. Other dishes you might remember from the American restaurants are the Bucket of Boat Trash featuring fried shrimp and crab claws, Jenny’s Catch of the day with Lobster Butter Sauce and Lt. Dan’s Drunken Shrimp (plenty of Forrest Gump references to go around).

It's a 400 seater restaurant across two floors that'll be open seven days a week, 11.30am until late. And there will also be a "retail market" selling merchandise and open daily at 9am and a bar on the first floor too. On the first floor there will be the "Gump House" for group parties too.

That corner of the Trocadero is going through a bit of a revamp and the moment and this opening is bound to be a huge draw.