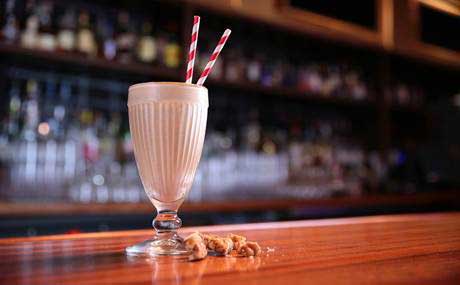 This, my friends is the Shake, Rattle and Roll milkshake, inspired by Elvis' favourite sandwich, which is being served up at Brookyn Bowl at the O2 in honour of the recently launched Elvis at The O2 Exhibition.

Inspired the King's favourite (and as it turned out very unwise) fried banana and peanut butter sandwich the shake is a blend of vanilla bean ice cream, rich peanut butter and bananas.

The shake is just the first of a series of new dishes inspired by the Southern foods from Memphis, USA, the home of Graceland, which will be served every few months. In coming months they'l be putting on the actual sandwich itself grilled in sweet butter and served with a mound of chips making it as they say "a one of a kind Rock n’ Roll food experience" or alternatively a one-way ticket to an appointment with your cardiologist.

If you're at the O2 to see the Elvis exhibition you'll get 25% off the menu at Brooklyn Bowl by showing your ticket receipt.

The Elvis menu will be on offer at Brooklyn Bowl London at the O2 until August 2015.