Broadgate Circle is about to completely revitalise City dining 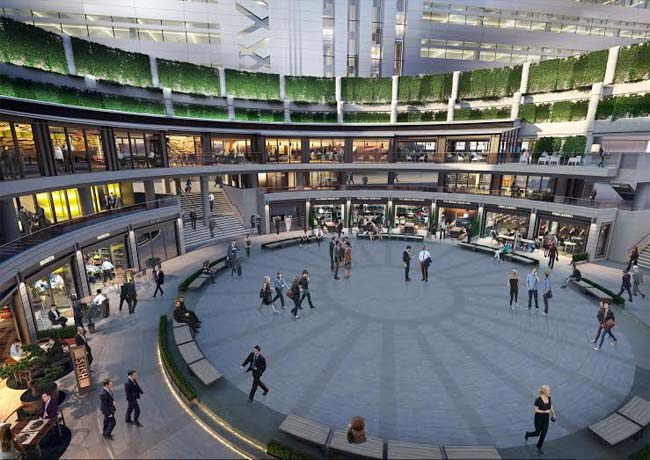 We've been hearing for a while about various restaurants opening up in the new Broadgate Circle which properly opens tomorrow, 15 April. And with this opening upon us, we're really becoming aware of what a big deal it is to City dining. In the next couple of months, 10 new restaurants are going to open there and some of them are a very big deal indeed. It's similar to the changing dining scene at King's Cross, but happening much faster.

So, here's what to look out for in the area and to highlight why you may be heading to Liverpool Street station much more in the future...

This is the next big restaurant from the acclaimed Spanish chef. Early previews of the new menu have already gone down well. It's an all-day affair this time too (we look forward to jamón Ibérico with fried egg and patatas fritas) and like many of the Broadgate restaurants will have outside dining . Read our story about the opening.

This is the second Yauatcha (from the Hakkasan Group) in London and this has a separate patisserie in tow for all your macaron needs. Again, lots of outside space and venison puffs too.  Read our story here.

This is the latest from Tom and Ed Martin and the first time they've re-used the Botanist name (a big hit in Chelsea). Expect this to be a big late night destination as the downstairs Soda Room will be open until 2am. Read our story here.

This is the flagship location for the group, who already have a kiosk in the area. Expect a big focus on brunch-style food and takeaway salads for local workers too. Read our story here.

This is Aubaine's ninth London restaurant, an all-day restaurant, boulangerie and patisserie. Also worth noting - they're giving away 1000 free pastries on opening day. Find out more about Aubaine on Twitter @aubaineuk

Comptoir Libanais' latest location offers a similar Lebanese offering to its other restaurants across the city. Find out more from them on Twitter @ComptoirLibanai

This is a first for Crab Tavern (although we'd expect more to follow). It's an American style surf and turf restaurant with a big focus on crab with crab doughnuts with Singapore crab - and we must say we're intrigued at the promised cheddar stuffed bacon burger.

No self respecting new restaurant development could open without ramen on the menu. Shoryu's latest will have the usual tonkotsu ramen and Shoryu buns but will also have a Robata grill and a large sushi bar at Broadgate. Find out more from them on Twitter @shoryuramen.

No introduction is needed for Franco Manca. Just good pizzas all round, and now in the City. Their latest location will seat 80 hungry City diners. Find out more from them on Twitter @francomancapizz

Street Kitchen has made Broadgate its home for a few years now and now their finally going permanent (although the original airstream trailer will remain in situ too). Their new restaurant is called Sandwich making - yes -  sandwiches with sustainable British ingredients.

They've been in place in Finsbury Avenue for a while and now this gathering of street food trucks is moving into Broadgate Circle. For the first week, expect subs from Sub Cult, crepes from Suzette, Vietnamese from Hanoi Kitchen, brioche sliders from Ate, and Korean BBQ from Busan. To find out who's on at any given day, folllow them on Twitter @StreetDots.

And that's not all. The central terrace section will host a number of events, including an upcoming Bake-Off by City chefs and cocktail masterclasses from Tony Conigiliaro as well as open-air Shakespeare. And from 22nd - 25th of April, they're hosting Social Dining - where each restaurant will be bringing out samples into a table that takes over the centre of the Circle.