Brewhouse and Kitchen opens in Islington 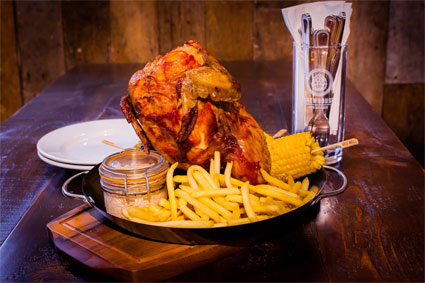 This new Islington bar and Kitchen, with a strong specialty in craft beer is opening both sides of Islington, with the Angel outpost open now.

What you need to know about Brewhouse and Kitchen

They've been established outside of London - they're currently opened in Portsmouth and Dorchester, with a Highbury version coming after the Angel opening and Bristol one later in the year.

Their specialty will be craft beer which they brew themselves, on the premises. The microbrewery is at the back of the pub, where you'll see the head brewer, Pete Hughes, at work. The beer menu for Islington includes:

And you can take home a 5 litre mini keg can be filled up with your favourite brew.

And there's plenty of food to soak up the beer. That'll include beer-can chicken, rib-eye steaks, pan-fried sea bass and Sunday roasts. They'll also have a pairing chart for beer & food matching.

And there will be plenty of extra add-ons and experiences too. Expect a Brewing Experience Day where they'll take you through the onsite brewing process, beer tasting sessions, opportunities to meet the brewer and more.

Where is it? Islington, Torrens Street, Angel, London EC1V 1NQ.

And when does it open? It's open now - on soft launch until October 6. (The Highbury bar will open early 2015)