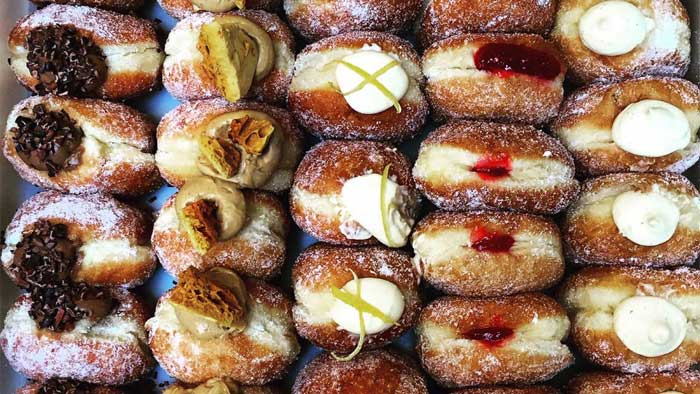 Keeping London stocked with quality British baking - that’s the mission of bakery Bread Ahead, who’ll be opening their second shop in Seven Dials this October following the ongoing success of their Borough Market branch. Expect to see lots of their famous sugary doughnuts - great for those who’ve accepted welcomed carbs back into their lives with open arms. We hear their Vanilla Custard; Salted Caramel custard and Honeycomb; and Homemade Jam doughnuts will all be making frequent appearances.

And coming soon after opening are their very popular brioche sandwiches. Aside from daily specials, diners visiting their new branch, in Covent Garden’s bustling Seven Dials (where the Bowler used to be) will be able to choose from a selection of savoury stuffings. There’ll be the Cold Roast Chicken Caesar, the Neal’s Yard Dairy Cheddar and Pickle, and the tangy Hot Pot Salt Roast Beef and English Mustard. Keep an eye on Twitter for when these will be available.

The other big news is that they’ll be opening a new artisan baking school. Based in their Borough Market shop, students will get to tackle the classic English loaves like sourdough, plus more exotic fare, such as gluten-free bread, Middle Eastern flat bread and in the run up to Christmas, yule logs.

The workshops will run throughout the year and span a day or a half day each at £160/£80, and are taught by Bread Ahead’s expert bakery tutors. Aspiring chefs with all levels of baking know-how are welcome, so it’s a great gift for foodie friends (especially those who’ve given up on the Paleo diet.)

Bread Ahead Covent Garden is set to open 12 October 2016 at 1a Monmouth Street, London, WC2H 9DA. Opening hours will be 7.30am - 8pm. They'll be serving doughnuts and bread to start with, and sandwiches soon after opening. Follow them on Twitter @breadahead