[SIGPLUS_EXCEPTION_SOURCE] Image source is expected to be a full URL or a path relative to the image base folder specified in the back-end but /blog/2014/bonniegullnews/gallery is neither a URL nor a relative path to an existing file or folder.
0
Shares 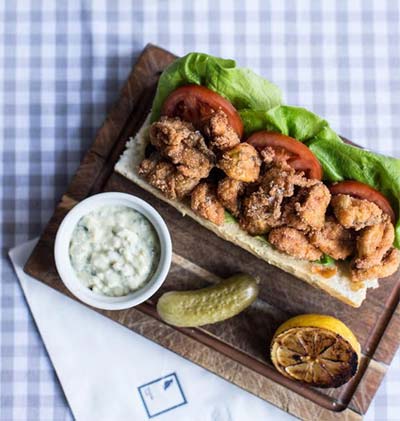 We've had a lot more details come in about Bonnie Gull's second venture at Exmouth Market - now named Bonnie Gull Seafood Cafe. Their previous "seafood shack" has proven a hit in Fitzrovia, after making a name for itself with some successful popups and this second restaurant will be making its debut in April.

The Seafood Cafe is really embracing the idea of being a seaside fish bar transplanted right into the heart of Exmouth Market - it'll be bigger than the original (seating 82 inside and a further 20 outside) with "a more informal 1960s British seaside cafe feel”. There's also much more of a focus on grabbing a fast bite at this new restaurant. They'll have a shellfish table where they'll have oysters, cockles, smoked mussels and langoustines all served on newspaper (and "an oyster chest made out of parts of a pinball machine"). Alongside these "shells" they'll have "rolls" on offer which include their take on a southern US shrimp sub, a "Cockney Po’ Boy" as well as lobster rolls, fresh picked crab milk-rolls and fish finger sandwiches.

If you're stopping a while, the main restaurant will have:

Finally - sticking to the seafood cafe theme, they'll have Blackpool rock and bags of Cornish fudge too. And in the weekend, they'll be adding a brunch which will add an omelette Arnold Bennet with Arbroath smokie and the full Bonnie Breakfast.

Drinks-wise, they'll have a small selection of cocktails including a favourite from the original restaurant - the Bonnie Mary: infused vodka with homemade clamato juice and an oyster garnish.

Bonnie Gull Seafood Cafe will open at 55-57 Exmouth Market, London EC1R 4QL seven days a week for lunch and dinner (and brunch at weekends), on 22 April 2014. Booking lines are now open on 0203 122 0047. For more information, follow them on Twitter @BonnieGull.