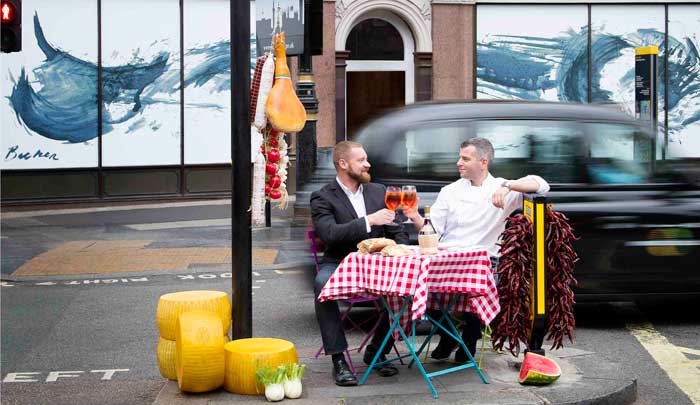 So, we've been waiting patiently to hear what Bocca di Lupo owners Jacob Kenedy and Victor Hugo were going to open at Cambridge Circus, and this week we've been rewarded with details of what will be called Vico.

The new restaurant will focus on affordable Italian street food, and it sounds as though they're taking this concept seriously. Which means that the menu and look of the place will aim to make you feel as though you're wandering in an Italian piazza (albeit indoors and just off Shaftesbury Avenue). The food we're told will be "intensely casual – cutlery frowned upon". In practice that means pizzas by the slice - to compete with their newly-opened neighbour NY Fold - polpette and arancini etc. And we're not quite sure how this is going to work, but they're not intending to have a menu as such "chefs will be cooking at whim what the markets, farms, hunters and fishermen deliver".

The design of the restaurant will go some way to supporting this theme - the ground floor will apparently have minimal seating to echo that whole eating in a piazza feel.

As for drinks, there'll just be a house wine served by the carafe along with spritz, beer and soft drinks.

And, at the front of the building there'll be a large Gelupo counter serving up gelato and other iced desserts along with cakes and fried desserts, and speciality coffees like zabaione, nocciola and affogato).

Vico will open at One Cambridge Circus, London WC2H 8PA on 28 August 2015. There will be a soft launch from Friday 28 - Sat 29 August with 50% off food, no reservations - jut walk up. Keep up with their news on Twitter and Instagram @eatvico