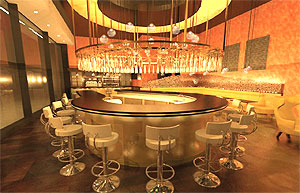 This week, Hot Dinners paid a visit to the new Searcy's Champagne Bar in One New Change.  It's a marked departure from the other fizz bars in the group; rather than being out in the open, this bar has its own unit amidst the high class shops of the city shopping destination. Serving up apparently the largest selection of champagnes by the glass in Europe, the list here is also of note due to the number of bottles staff here will decant for you. A stylish drinking hole for any tourists, shoppers or city workers.

We weren't the only ones checking out the new bar as we heard over Twitter the following day that Gordon Ramsay himself had been in for a visit.  Gordon's obviously checking out the competition for his upcoming Bread Street Kitchen as he's also been visiting Jamie's Barbecoa, just across the corridor from his unopened venue.  Hopefully he wasn't too envious of Jamie's, frankly amazing, view.

Meanwhile, Heston Blumenthal has decide on a way to follow up his sell-out Christmas pudding and has settled on a Royal Wedding trifle which combines all things trifling with the best bits of an Eton Mess. It's all very British, but we can't imagine that it will sell quite as well as the puddings did on eBay, given that trifles aren't the easiest things to pop in the post.

Thankfully, we can trust in Americans to go one step further down the dessert route with news this week that family restaurant chain Denny's has launched a Maple bacon sundae in the US. We can feel our arteries hardening just reading about it.

In other news this week, we learned: