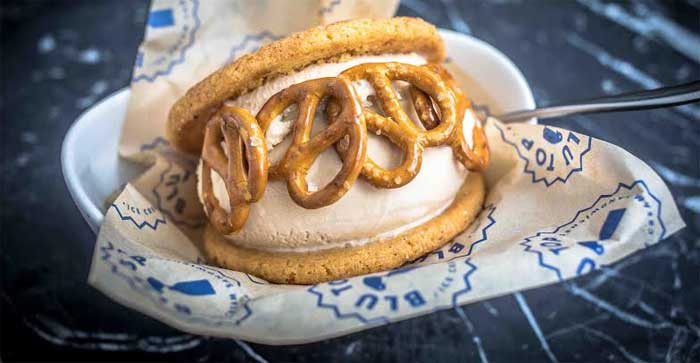 This? Oh it's just a Bourbon Whiskey Old Fashioned ice-cream sandwich. Yep, thought that might get your interest up. It's just one of the ice-cream sarnies appearing on the menu at City spot Bread Street Kitchen as a result of a month-long residency by Blu Top.

The ice-cream specialists will be featuring weekly specials on the dessert menu at BSK throughout August - other delights could be Brown Toast and Jam, Coffee and Donuts with the cookie sandwiches ranging from Cinnamon Snickadoodle to Brown Butter Chocolate Chip. They'll also be putting on various boozy shakes too.

You'll find Blu Top until 31 August 2015 at Bread Street Kitchen, 10 Bread Street, London, EC4M 9AJ. Keep up with both of their news on Twitter @breadstkitchen and @blutopicecream