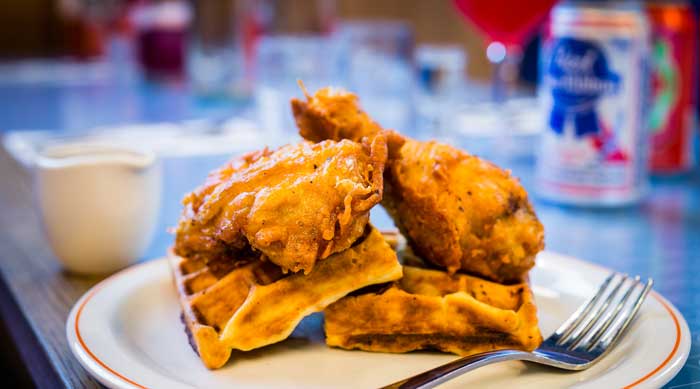 Super popular East London fried chicken shop BIRD is building on its success with two new openings planned for North London this Autumn. Their first will be in October in Islington on the Holloway Road (where The Bailey used to be) The second will be in Camden in November - we'll bring you more news on that when we get it.

Expect to see a new menu for BIRD Islington. Hot Dinners got the scoop on at least three new dishes they'll be showcasing there

But you'll also be able to get the kind of food that won them so many fans in Shoreditch including the Original Waffle Burger.

As Islington folk ourselves, we're particularly pleased to hear that BIRD’s Doughnut Hatch will also be coming to Holloway Road. This, as the description suggests, is a hatch serving fresh risen glazed doughnuts made daily in-house. You can grab them to take away or - and this would be our preference - sit down and scarf an ice cream doughnut sandwich. That hatch will also be pretty useful when hordes of Arsenal fans descend on match days as it will double double as a takeaway window .

BIRD Islington opens on the 8th of October at 81 Holloway Road N7 8LT. There'll be a soft launch from 1-7 October with 50% off food. Keep up with their news on Twitter @birdrestaurant