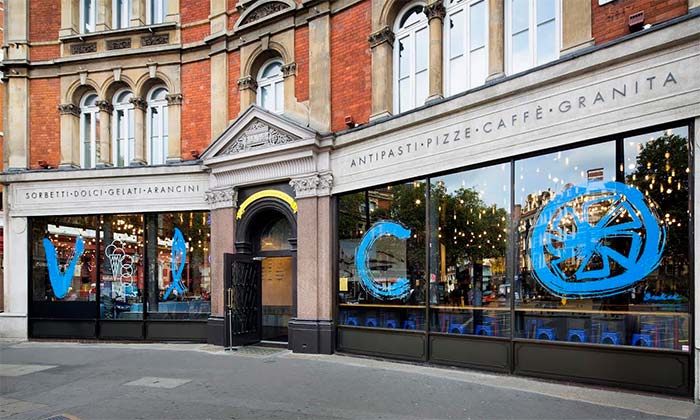 The latest restaurant from Jacob Kenedy, Vico, met with some mixed reception when it opened earlier this year. And now it seems that people haven't embraced the fast-food-Italian counter-ordering approach and the restaurant is going through some fairly big changes.

First, the look of the place itself. The dining area has been brightened, traditional chairs and tables are in place and there's a new central water fountain - "hand-crafted in Lapis-like terrazzo" that's going to be the main centrepiece of the restaurant. And the counter service is going and being replaced by traditional waiter service - that's being looked after by Bocca du Lupo's Victor Hugo. Alongside this, the restaurant will now take reservations.

Plus the menu's getting overhauled in a big way too - moving away from street food to regional Italian fare - themed around picking dishes from the Appian Way between Rome and Brindisi. It's also more traditionally split between starters, pizzas and pasta mains and desserts. On the menu we've seen, there's:

There's a LOT more and we have to admit that the menu looks great and more immediately grabs the attention in a way that Vico's original premise didn't. Vico's in a pretty good location on Cambridge Circus and this menu seems more likely to draw in the crowds.

On top of the above, there are desserts including Pastiera (ricotta, wholegrain farro, orange and cinnamon cake) and a range of sundaes - using Gelupo ice cream, of course. Those include Rome (rice gelato, strawberry sorbet, puffed rice & fresh strawberries) and Amalfi (lemon & presecco sorbets, sponge cake soaked in limoncello). And finally there will be a bigger wine list with much available by the wine and glass.

Vico will relaunch this week on 17 December 2015 at 1 Cambridge Circus, London, WC2H 8PA. For more, follow them on Twitter @eatvico