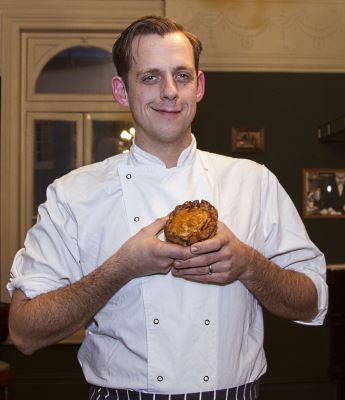 Timed to coincide with the start of British Pie Week (3-9 March 2014) last night saw chefs from restaurants and pubs across Britain competing at West London gastropub the Princess Victoria for the inaugural Pork Pie Off in aid of the charity, Action Against Hunger.

Each place came with their interpretation of the quintessential British classic, the Pork Pie but there could be only one winner. And that was Tom Langdon from Bermondsey gastropub The Garrison (pictured here with his winning pie). The Garrison pulled off a double, winning both the public and judges vote for his Pugly Pie which was made with pork shoulder, smoked streaky bacon, pork belly, mace, ground white pepper, garlic powder, nutmeg and cumin.

Langdon beat off stiff competition from chefs including Henry Harris (Racine), Peter Weeden (Newman Street Tavern), TV’s Andy Bates (‘The Pie Man’) and the pub's own chef Matt Reuther. His pie will be on sale in the pub from this Friday.

A cracking night was apparently had by all, and even better they managed to raise £500 for Action Against Hunger. As the Princess Victoria's owner said: “Tonight’s event was about getting the community together to celebrate British Pie week, our love of great tasting pies and local craft beers! The fact that we could raise money for such a great charity makes it all the better”.

Who ate all the pies?

Looking for somewhere to eat pies during British Pie Week? Here's our pick of some of the best pies to be had in London.