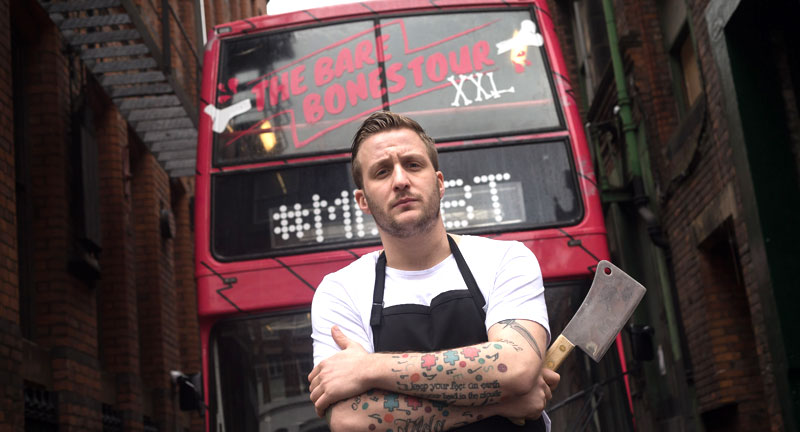 ​Vegans, look away now. ​Vegetarians too​, actually​. In fact, this advice applies to everyone who’s not immediately intrigued at the sound of a new ‘bad-ass BBQ shack on wheels.’

Hyper-macho hot sauce sellers Meat Lust (who have the motto ‘Thug flavours that punch hard and don’t apologise’) has joined forces with some of London’s most notorious street food vendors for a capital-wide tour from their Bare Bones Bus - a repurposed double decker, freshly kitted out with a barbeque grill.

At the wheel will be Ben Spalding, of The Fat Duck, Ledbury and other legendary restaurants. For four days, spread across two weekends, he’ll be leading the charge through London, accompanied by chefs from Bleeker Street, Foxlow, Clutch and more.

Over the course of three hours, they’ll be setting out to do the rounds through London, giving meat-loving Londoners a chance to sample off-menu dishes at a range of restaurants, as well as tuck into dishes made on the bus’s grill, a hefty beast by the name of a Primo XL400. That’ll live upstairs, while downstairs there’ll be a craft beer bar from Gipsy Hill Brewing, which’ll be on hand to offer pairings to go with all the dishes.

A ticket on the Bare Bones Bus will run you £30, which seems more than fair for a culinary experience type day out in London. That’ll include four off-menu taster dishes at the Foxlow, The Bowler, mini Bleecker burgers, RibMan and Clutch Chicken, four dishes cooked on the bus as you move from place to place, and four bottles of beer and a bottle of Meat Lust sauce to take home.

There’ll also be a Q+A with Ben Spalding and other head chefs, so you can finally ask all your those burning, and grilling, questions. It’s bound to be popular, and tickets are already selling quite quickly, so if you want to get a seat on the meat bus (a phrase we’re not sure we’ve ​had to use before), don’t delay too long.

The Bare Bones Bus Tour takes place on 4, 5, 11, 12 February 2017 between 2-5pm and 6-9pm across London. Tickets are £30 and on sale now. Follow Meat Lust on Twitter @MeatLust and Ben Spalding on Twitter @chefbenspalding