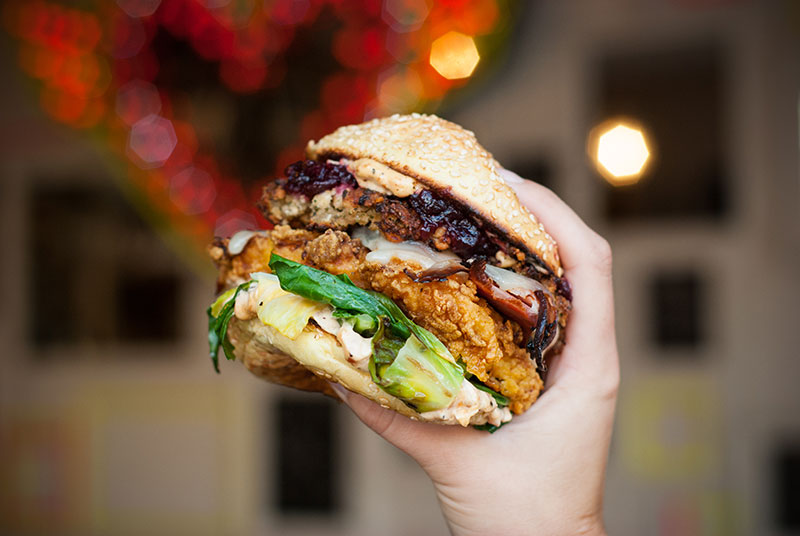 What’s a 'winter burger' when it’s at home? When it’s made with brined turkey, ham and buttered brussels sprouts.

It's part of south London restaurant Ben’s Canteen’s new 'Winter Burger & Brunch' shack pop-up, which will be temporarily setting up in Battersea Power Station for the season.

They’ll be slinging several of your usual burgers, including a classic cheese and a veggie alternative, but naturally we’re most interested in the Xmas Turkey one. First, there’s sage-brined turkey. Then, that’s topped with Karma cola-braised ham, a squashed stuffing ball, followed by brie, bacon, a blob of chestnut mayo. And then that's all finished off with some mulled wine and cranberry jam.

If you’re thinking “but where are the potatoes?”, then here's your answer: their 'Loaded Roasties' come in the form of spuds, roasted in duck fat, topped with sausage, bacon, sprouts, and red wine gravy. And if you feel like getting really festive (i.e. massively overdoing it), to finish, there’ll be DIY doughnuts that are stuffed, much like you’ll be, with ‘Xmas fillings’.

Outside of that, they’ll also be sorting locals out with brunches, like smashed avo on flatbread with corn and bean salsa, or granola with wild fig and orange compote.

Although the Winter Burger & Brunch Shack be in a “tented area”, there will be heaters on hand to ensure you don’t freeze, and will have riverside views that should make brisk conditions a little bit more worth it.

And if you like the sound of the Xmas burger, or the roasties, but aren’t able to make it to the pop-up, they’ll be available from the restaurant’s Clapham and Earlsfield sites for a limited time too.