Ben's Canteen comes top in the 2014 Sausage Roll off 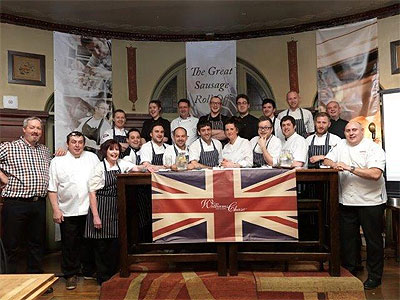 Congrats to Battersea's Ben's Canteen which walked away from last night's Sausage Roll Off at the Red Lion in Barnes with the top prize. Chef Chris Bumby won with his all day breakfast roll served with a Bloody Mary shot. More specifically it was made with Blythburgh Pork sausage meat, Stornaway black pudding, homemade tomato puree, smoked pancetta and soft boiled quails egg.

As one judge, blogger Food Urchin, explained: "Deciding factor for this sausage roll? It was the one we'd return to."

It was a tough competition with Ben's Canteen being closely followed by the other runners-up Jamie Thickett and Ben Mulock from Opera Tavern and newly opened Mayfair pub The Running Horse. Ben and Jamie's roll was <brace yourself> Iberico collar minced and rolled rolled in jamon floss sitting around red onion marmalade chopped. Manteca pastry. And chorizo ketchup.

The Running Horse only opened its doors in October but still managed to beat off more established restaurants and pubs. They served up a Wild Rabbit and Chestnut Mushroom sausage roll with a carrot and thyme puree.

The winning Ben's Canteen sausage roll will be served at their place in Battersea on 6 February 2014 from 5pm.