[SIGPLUS_EXCEPTION_SOURCE] Image source is expected to be a full URL or a path relative to the image base folder specified in the back-end but /blog/2012/beardtotail/gallery is neither a URL nor a relative path to an existing file or folder.
0
Shares 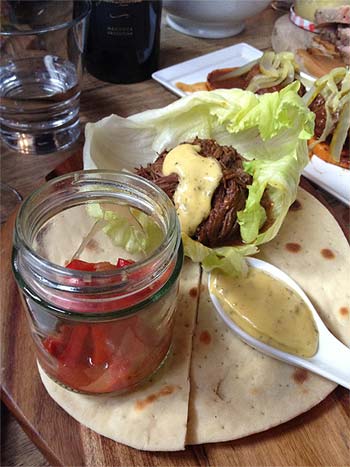 The team behind the Shoreditch cocktail institution, Callooh Callay, gave East London a high-spirited preview of their forthcoming restaurant and whisky bar at a pop-up last week.

Beard To Tail set up temporary home at the Marie Lloyd pub in Hoxton, where diners hunkered down cheek by jowl at communal tables for a taste of what was to come at the new restaurant, scheduled to open at 77 Curtain Road, Shoreditch this September.

England may have been trouncing Sweden the night we were there, but no one seemed to care as they kicked things off with the ingenious cocktails Callooh Callay is renowned for. My sweet and minty julep was served in a gleaming silver tin, my dinnermate’s Old Pendennis came in a jam jar while the signature Andy Warhol was supped out of a Campbell’s soup can.

One cocktail was enough to blunt decision-making faculties, but fortunately the order of play had been decided for us with a £25 set menu of three starters, three mains and two desserts to be shared between two. Or was that a family of five? It might well have been, so generous were the portions.

As its name and piggy logo suggest, Beard To Tail is no place for veggies – the focus is on meat, and lots of it. Traditional British couplings, like pork and apple sauce, dovetail with American-influenced combos, such as spiced rump tartare drizzled with Rittenhouse Rye, and bagels with Jalapeno garlic butter.

The herby bagels made a filling starter (eat in moderation if you want to save yourself) and were served alongside the piquant tartare, topped with a dainty quail’s egg, and a platter of juicy braised pigs’ trotters with sage and apricot stuffing, pickled red cabbage and apple sauce. And that was just the beginning.

The three mains landed on our already groaning table, and we all piled in. Beard To Tail’s signature dish, the Rumpie Pumpie Suffolk Pork Rump, came on a wooden platter with a jam jar of apple sauce and a jug of rich gravy. The meat had been marinaded for 24 hours in sage and wild garlic, which had some diners in ecstasy, but the surprise hit at our table of pop-up regulars was the Pulled Beef Featherblade with green peppercorn hollandaise. The shredded, slow-cooked meat arrived cradled in a crisp lettuce leaf served on flatbread with a jam jar of mixed peppers on the side. Bearded pig cheeks on sweet potato with ginger and dill pickle completed the trio of mains, with token vegetables coming in the form of Tenderstem broccoli and sweet potato mash.

Our desserts looked gorgeous but took us to the bridge. The Sundae Bible was a towering confection of crushed gingernut cheesecake, Southern Comfort and cream – we loved the crunchy biscuity bits in the middle of all the whipped-up madness. The Mutherofall Sundaes, meanwhile, was even more of a challenge, with ice cream, marshmallows, Oreo cookies, yet more cream and Jack Daniel’s syrup. It was too sweet and sticky for our taste, but the presentation – in a half-shell of a Jack Daniel’s bottle – deserves a special mention. A bottle of the ripe and dark Argentinian Bodegas Septimo Gran Reserve (£25) washed it all down.

Diners at the new all-day restaurant can expect three courses for around £25, with most dishes within the very reasonable range of £8-£15. ‘We’re not in competition with the London steakhouses,’ said owner Richard Wynne. ‘We’ll be using unusual cuts of meat on the menu. It’s about using all you can of the animal – belly, ribs, cheeks, skin – and using it really well. We’re not afraid of the word “fat”.’ There will also be a deli counter teas and coffees, sandwiches and small plates and sharing boards. They'll also be serving breakfast with toasted crumpets and home-made breakfast condiments, baked eggs with chorizo and manchego cheese, and boiled eggs accompanied by bacon croutons, portobello mushrooms and (marmite) toasty soldiers.

If you’re a red-blooded carnivore or a whisky geek (the bar will be offering tasting flights for £8), this is one to watch.

Beard to Tail is opening at 77 Curtain Road, Shoreditch, London EC2A in September