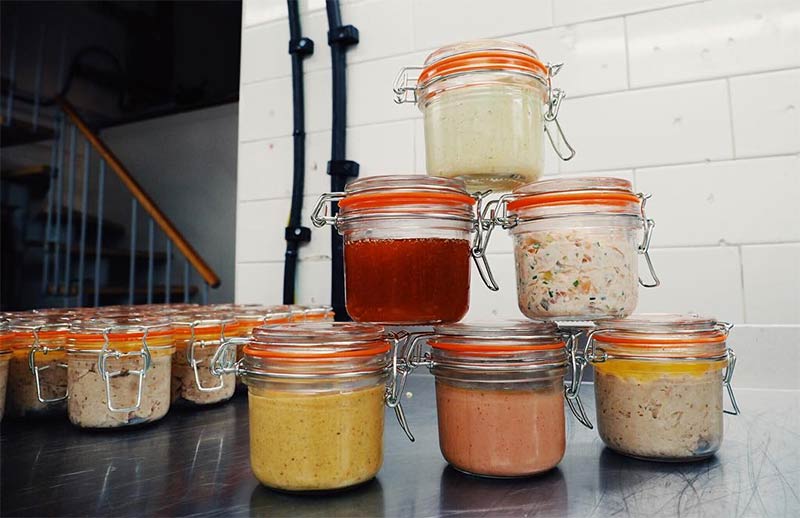 In a nutshell: Salads, snacks, coffee and baked goods for the City crowd from Adam Handling.

Summing it all up: Not satisfied with adding more outposts of The Frog to London, Adam Handling is also opening his own cafe in the City. And it's all about helping his restaurants to go fully waste free.

It really is the year that no-waste has become a big thing in London. From the wastED pop-up at Selfridges to the no-wasted cocktails at The Curtain, London has really embraced the idea. And the latest to join in is the new place from Adam Handling. His Bean & Wheat is a new cafe which will help The Frog E1 go totally waste free.

The chefs at Adam's other restaurant, The Frog E1, will be packaging up off-cuts and byproducts of the main restaurant into kilner jars (that's them above) - and they'll be on offer to anyone coming to Bean & Wheat who can pick and choose what they want in their salads or sarnies.

Those fillings will change daily depending on what's been on the menu at The Frog E1, but we've been told to expect duck liver parfait, chunky pork terrine, and bean hummus, all made with items that would have been thrown away otherwise. There'll be reclaimed veg salads as well, featuring the likes of cauliflower stalks, grains and beans.

Aside from the off-cuts, they'll also have freshly baked retro-inspired cakes, bread from the E5 Bakehouse and beyond. And alongside coffee and tea, there will be Adam Handling's Black & White cold-pressed juice range made with vegetable and fruit that are slightly misshapen and would normally, and tragically, end up in the bin.

Adam's own Black & White cold-pressed juice range made with vegetable and fruit that are slightly misshapen and would normally, and tragically, end up in the bin.

And it'll mainly be for the City workers, as it'll only be open from 7am to 6pm Monday to Friday.

The idea is to eliminate ALL the waste from The Frog E1, so anything that doesn't get used up in Bean and Wheat will be sent to a compost pit which will eventually go back into growing new fruit and veg for the restaurant.

Where is it? 13 Artillery Passage, London E1 7LJ