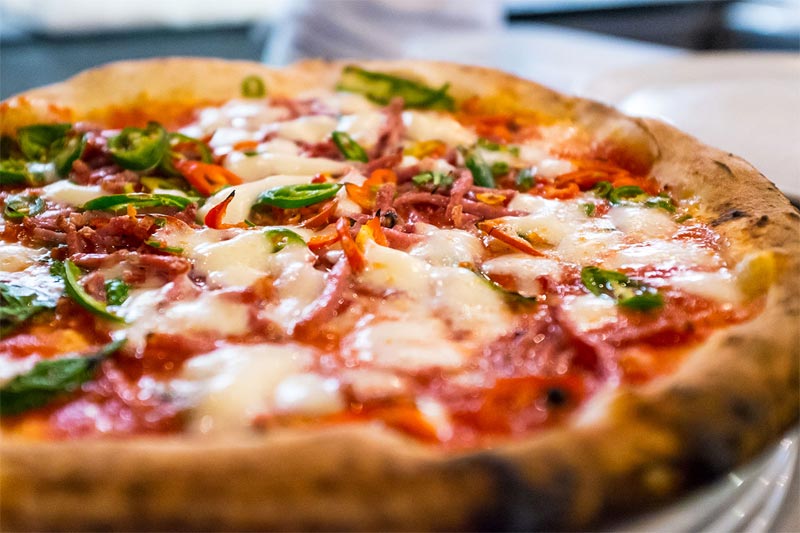 Summing it all up: “Quality and quantity at honest prices” is Santa Maria’s motto, something they apply to all their affordable, authentic and outright delicious pizzas, which have earned them plenty of accolades and awards since opening in Ealing in 2010, and later in Chelsea. Now they’re finally making the move to Central London, and boy are we ever excited…

We're all firmly in comfort food mode, and we’re fiending for all things carby and cheese-laden. Great news then that Santa Maria, Ealing’s and Chelsea’s award-winning Neapolitan pizzeria is setting up a new base in Fitzrovia.

Seating around 40, the central location of the new venue means it'll finally be practical for those outside of the West/South West to get involved with their famous, chewy pizzas. And famous they are, made in the traditional method before being dribbled with their hand-crushed tomato sauce and covered in classic toppings, like their San Francesco’s artichokes and aubergines, or the San Gennaro’s anchovies, black olives, and capers. They also have a starters menu overflowing with things we’d *love* to eat - oily Sicilian caponata stew, carpaccio di bresaola, and fresella di bufala dough balls with buffalo mozzarella…

When Santa Maria’s flagship Ealing store opened in 2010, it was an instant hit, with word spreading quickly about Angelo and Pasquale’s authentic pizza whipped up “using the same ingredients and adopting the same cooking method” as in Naples. It quickly earned itself a spot in the hearts of locals and those further along, and even ended up on the Sunday Times’ list of the top 100 restaurants in the UK.

“Being featured in the list of “Best of something”, is always nice, but when your name appears in the Sunday Times Top UK 100 Restaurants, among the top players in the game, it’s an achievement that makes us incredibly proud,” they said.

Where is it? 160 New Cavendish St, Fitzrovia, London W1W 6YR

Soft launch details: 50% off food until 13 February(walk-ins only).